Along with conserving the environment by recycling used flex, the initiative this year will form a source of sustainable income for underprivileged women, bringing cheer in the festive season 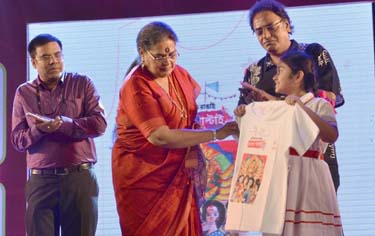 Along with conserving the environment by recycling used flex, the initiative this year will form a source of sustainable income for underprivileged women, bringing cheer in the festive season

Spreading joy takes on a new dimension as Star Jalsha, the No. 1 Bengali GEC from Star Entertainment Media, makes this Durga Puja both meaningful and fun for the have-nots as it, through the ‘Chalo Paltai’ (Let’s Change) brand philosophy of the channel, pledges to touch the lives of the underprivileged.

Last year Star Jalsha widened its brand philosophy from pure entertainment to saving the environment. Post its brand refresh last year, wherein the channel had plastered the city with billboards, the channel came up with an innovative approach to contribute towards saving the environment – by recycling the billboard flex which otherwise would have been burnt causing huge carbon emission. As part of its commitment to change, Star Jalsha has unlocked a huge potential in waste management. Its project of converting waste generated from its billboard flex into shopping bags, folders, CD covers, table mats, wall hangings and other useful items bagged two coveted awards – The Olive Crown and The Bloomberg Brand Leadership Award for Sustainable Marketing Leadership. This green initiative has helped reduce toxic waste in Kolkata.

Taking the initiative to the next level this year, Star Jalsha, true to its motto of ‘Chalo Paltai’, is all set to change the lives of underprivileged women. The channel roped in students from fashion design institute INIFD who were given the task of coming up with aesthetically enhanced and commercially viable designs. Through a contest the top 8 designs were selected by ace fashion designers Abhishek Dutta and Agnimitra Paul and the knowhow handed over to the NGO Hope Foundation. Destitute women associated with the foundation would replicate the designs on flex converting them to a sustainable source of income. Hence, along with conserving the environment by recycling used flex, the initiative now will form a source of sustainable income for the underprivileged women.

In tandem with the festive season in another of its ‘Chalo Paltai’ initiative, Star Jalsha conducted a School Contact Programme across 50 schools in Kolkata in August and September, where a painting competition was organised for students of classes 1 to 8.  Of the shortlisted 200 entries, five paintings were selected by renowned painter Subroto Gangopadhyay, reproduced on T-shirts and distributed amongst street children and slum dwelling kids. Through this gesture the channel has managed to not just lift the spirits of the street children but also build a bridge between the school-going, privileged ones and them. The grand finale saw five winning designs for the T-shirt design contest and three winners for the flex design contest being awarded at a ceremony that saw the presence of celebrities like Usha Uthup, Tollywood actor Payel Sarkar, designer Agnimitra Paul and Avishek Dutta, painter Subroto Gangopadhyay and popular Star Jalsha characters.

Commenting on the unique and pioneering initiative, Sumanta Bose, Sr. Vice-President, Star India, said, “Our shows communicate the message of ‘Chalo Paltai’, but being the ‘change makers’ in the life of the common man and the world as a whole is what inspired us to take up these initiatives. We have been touching the hearts of our viewers through our progressive characters and shows, and are glad that now through our unique initiative we could touch the lives of many who needed it the most. Our brand philosophy is all about progressive change and through our initiatives we try to strengthen our commitment towards bringing about joy and happiness whether it is in the domain of entertainment, environment or human life.”

As far as Kolkata is concerned Star Jalsha’s ‘Chalo Paltai’ has promised change and delivered.