The winner of the Mumbai leg of Portfolio Night 11, Chaitanya feels that advertising cannot be learnt in a school, that ideas can strike you anywhere, anytime. He wanted to be journalist but was disillusioned. He joined MICA from where Chax picked him up for Draftfcb+Ulka. The rest is history 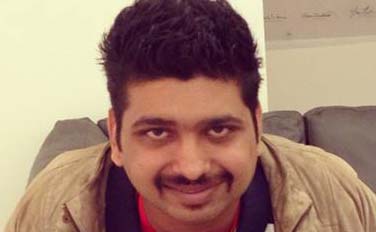 The winner of the Mumbai leg of Portfolio Night 11, Chaitanya feels that advertising cannot be learnt in a school, that ideas can strike you anywhere, anytime. He wanted to be journalist but was disillusioned. He joined MICA from where Chax picked him up for Draftfcb+Ulka. The rest is history Sohini Sen | Mumbai | October 15, 2013

Chaitanya Joshi's life seems like the perfect one for an ad enthusiast. Starting off with other ideas, getting into advertising at a young age, gold medal in college, getting selected by one of the best agencies in the country, and finally, being named the Portfolio Night Winner from Mumbai. Who wouldn't want a dream story like that to share?

But Chaitanya’s initial plan was to study journalism. He started as well but realised it was “not as idealist” as he had thought it to be. The next logical step was to get into advertising. However, as college came to a close, fate had other plans for him. The global meltdown and recession from which the media world is still trying to recover today, hit around that time and Chaitanya ended up creating communication for a diamond company. This was followed by work in a pharma firm. A two-year stint in a production house followed.

Deciding not to wait any longer, he enrolled in Mudra Institute of Communication, Ahmedabad (MICA) where he went on to win the gold medal. He was hand-picked by none less than KS Chakravarthy ‘Chax’, National Creative Director, Draftfcb+Ulka, during one of his sessions at MICA. He started working at Draftfcb+Ulka in March 2012.

"I would have had to move back to Pune if MICA didn't happen. And if I hadn't studied there, I wouldn't have taken a different career – I would have probably just joined the field much earlier and learned on the job. As it is, advertising is not your regular 9 to 5 job. Hey, we don't even have a 'to this time' limit. Sometimes we are burning the midnight oil, sometimes we are working during the weekends, but most of the times it never seems like work," says young Chaitanya smilingly.

At DraftFCB+Ulka he has worked in various campaigns – Amul, Indian Oil, Anne French to name some.

"For Amul, the idea was to promote the whole range to the youth. Amul has always been something which is connected to goodness and health, but now we wanted to make it attractive to the youth. And I noticed that there are all these memes on the internet which go viral. If it can work in the digital media, why not in print? As a format, memes are engaging and can seamlessly go beyond the internet into print. So we created some memes with the concept of 'eat milk with every meal'. Again, for Indian Oil, we didn't want to go on the tried and tested path. So, instead of advertising it as oil or fuel, we wrote ads that did not talk about the product beyond a passing mention at the end. What we talked about though was a larger emotional connect to the masses. This worked for us, even though I tried using a long copy which is generally not used in print nowadays. Everyone says, ‘Who will read so much, why waste so much time?’ But the point is, if your idea is good, if it can hook on the reader, it will work. Otherwise books would have been out of business a long time back!" Chaitanya says while sipping coffee.

After almost a year of working, he decided to enter the Mumbai ‘Portfolio Night All Stars Creative Challenge’. The impetus was to meet all the great people judging the portfolio that night. According to Chaitanya, “We were already winners by getting our work criticised and appreciated by the industry bigwigs! What more could I hope for?"

But he should have hoped for more because he went on to win the 'All Star' in Mumbai! It is a different story though that he had left early that night and came to know from friends who called up to congratulate him some days later about his win. His prize was a trip to the USA where he got to spend a week at the Art Directors Club (ADC) headquarters, New York, to compete in the Portfolio Night All-Stars creative challenge – globally. There he met 22 other brilliant, creative young minds handpicked from Portfolio Night 11, the world’s largest advertising portfolio review and recruitment event. These future superstars assembled in Manhattan for the purpose of completing a weeklong creative advertising challenge: the Portfolio Night All-Stars competition sponsored by Ford and Adobe.

"The moment I landed in New York I was excited as well as disappointed. Excited as I was one of the privileged few who would be visiting the greatest melting pot of cultures and the mecca of advertising. Disappointed as I had seen NY too many times “colour corrected by Hollywood and Shah Rukh Khan", he remarks.

The week in NYC kick off with Ignacio Oreamuno flagging off the event. Chaitanya and the 22 others were divided into six teams to work on a real-life campaign for the launch of the 2014 Ford Focus. It is during this phase of the contest that he met and interacted with the stalwarts of advertising. The lineup included Benjamin Palmer of the Barbarian Group, Rei Inamoto, CCO, AKQA, Natalie Lam, ECD, McCaan, and Corinna Falusi, ECD, Ogilvy. Brendan Watson and Brett McKenzie from the ADC made sure the participants got the ‘All Star experience’.

‘Advertising does not happen in the agency’

Chaitanya recently returned from New York with a new outlook on advertising and some valuable lessons learnt. And he is wiser for that. "Advertising does not happen in the agency. It happens out of it, mostly. Good advertising cannot be learnt or executed in a cubicle of an air-conditioned office. The insights and perspectives I got just chatting with the fellow contestants reiterated the need to step out, talk and share. The streets, the malls, the local trains, or even a park can be the biggest inspiration for advertising. You never know, someone random down there could give you an award winning idea, or a stunning insight. One should also remember that Eureka moments are rare. Yes, I did wait for one when working on the brief. Yes, ideas can strike you anywhere, anytime. But this happens more seldom than often. Most of the times, a battery of ideas has to be culled, the remains whetted, to get to the one thought that simply works. You can't forget that anybody out there can take your job. Advertising is not only restricted to advertisers. There are technology experts, rap artists, hardcore product designers, hotdog sellers – and the guys who managed to convince me to spend a bomb on a chopper ride over Manhattan! – who have honed the craft far better. They simply don’t call it advertising," he says.

I ask him if he sees a difference in the work ethics between the USA and India. He nods. But then clarifies that it is only because the circumstances are different. In New Jersey, where he stayed for a week after his NYC trip, people would get out of office sharp at 6. But they would also probably go to bed or stay inside their house at night – far removed from the work culture in India, where the creatives sometimes stay overnight brainstorming over ideas. Yes, there are the usual late nights in the US, but far lesser compared to India. But that’s because the overall work scenario is different. What works for them might not work for us, is what Chaitanya has to say.

"In India the problem has also been that we underestimate the consumer a lot. We say, even before we have made the ad, that it won't work – 'Arre, logon ko nahi samjh mein ayeega' (people won't understand). Very few people are willing to take the risk which is why the overall work scene in terms of creative ideas had stagnated a bit. But things are changing. Gone are the days when ad industry belonged to the purists. Idea has become the ultimate king. You can learn to write and draw, but you must be able to think. The barriers of medium, language, etc., then become secondary. Only then will you be able to make ads which are good. And by good advertising I mean to say something which either adds to your life in some way or entertains you, if it can't add to your life. Everything else is a waste," signs off Chaitanya.

Without a doubt, here is a youngster who is far wiser than his years, one whose name will be heard quite often in the near future. Chax sure has an eye for spotting talent.

Some of works by Chaitanya Joshi: