Follow intrepid adventurer and wildlife filmmaker Nigel Marven as he travels the world in search of the rarest animals, every night at 9 PM, starting November 4 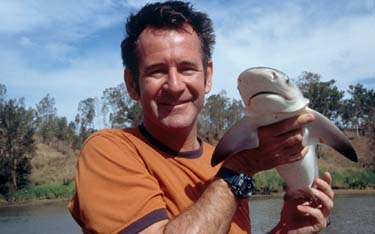 Follow intrepid adventurer and wildlife filmmaker Nigel Marven as he travels the world in search of the rarest animals, every night at 9 PM, starting November 4

Nigel Marven is one of the most celebrated zoologists, wildlife adventurer, filmmaker and a television presenter. He has encountered killer whales, has come face to face with polar bears and has dived with bull sharks. This November, Animal Planet brings viewers closer to the animal kingdom with ‘Marvellous Marven’, a month-long programming special in which Nigel encounters some of the world’s most interesting and sometimes misunderstood creatures. The show premieres on November 4, 2013, and will air Monday to Friday at 9 PM.

Nigel has travelled to all corners of the world in search of animals, observing their natural way of life in their natural habitats. Marvellous Marven captures his new quest to find out and tackle some of the most unusual animals and follows him to unravel mystery of the shark islands off Costa Rica. Viewers experience Nigel’s thrilling adventures as he gets up close and personal with hammerhead sharks in the vast Pacific Ocean, visits far-flung corners of Yunnan province in Southern China in search of rarest creatures like snub-nosed monkeys, and tracks some awkward looking animals in Southern America.

Marvellous Marven kicks off with the episode ‘Ugly Animals’ as Nigel devotes time to find some of the weirdest looking animals and offers a platform to demonstrate their remarkable traits. He meets a massive male ‘warthog’, bristling with hair and covered in facial lumps or warts and explains how these lumps act as shock absorbers during battles. He reveals that these odd-looking animals have certain unique features which make them successful survivors in the wild. Nigel tracks frogs, elephant seals, wolf fish, naked mole rats, storks and star-nosed moles and finds them far more fascinating than a lot of beautiful creatures often seen by viewers on their television screens.

Nigel jets off to the Yunnan, China's most southern-most province, which hosts over 600 rivers and most spectacular mountain landscapes. Nigel braves those inhospitable terrains to uncover some of the rarest animals in his mission ‘Yunnan Adventure’. He meets a host of peculiar creatures like red pandas, rare turtles, snub-nosed monkeys and giant salamanders, and other animals found nowhere else in the country.

Nigel risks his life to unravel the mystery that lies beneath of waters of Cocos Island, off the coast of Costa Rica. In ‘Shark Islands’, he tickles a Reef Shark on the nose, joins a school of hammerheads for lunch, gives a Giant Ray a bubble bath and nearly gets swallowed by a sperm whale as he begins his quest to find out why sharks come to Shark Island. As he searches for the answer he meets creatures that also call this island their home – rays, turtles, booby birds, pigs and discovers the secrets behind the island, said to be the inspiration for both Jurassic Park and Treasure Island.