Created by JWT Hong Kong, the Indian edition of the ‘Take on the World’ global TVC has been specifically enhanced with Indian background music to connect with a wider audience 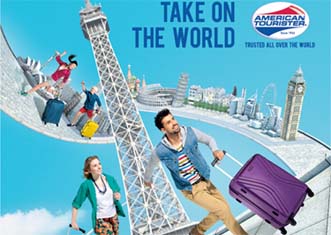 Created by JWT Hong Kong, the Indian edition of the ‘Take on the World’ global TVC has been specifically enhanced with Indian background music to connect with a wider audience

American Tourister has launched its brand new campaign – ‘Take on the World’ – yesterday in the Indian market. The campaign highlights the brand’s fresh, energetic, youthful appeal, and showcases the technology behind its new Vivolite range. Created by JWT Hong Kong, the Indian edition of this global TVC has been specifically tweeked with Indian background music to connect with a wider audience.

Featuring American Tourister’s new ultra-light and durable Vivolite suitcases, the TVC shows young travellers navigating the streets of Paris with their Vivolite luggage with ease, pulling the luggage over cobble stones, riding it down steep streets, and banging it down cement steps.

The high-paced TVC brings to life the brand’s fun, lighted-hearted and colourful attitude, while highlighting the durability of the stylish, lightweight Vivolite. The campaign, which was launched in Korea in July and will roll out across Asia Pacific through the rest of the year, also features a series of print ads that show a mix of global landmarks and young travellers from different parts of the world.

“The ‘Take on the World’ concept captures the fun, young and international spirit of American Tourister. With this campaign we have attempted to break the Indian media clutter with some unconventional music. It’s a catchy, fun music score that resonates the brand personality also. We believe it will help us reach out to a larger audience in India and help with better brand recall,’ commented Anushree Tainwala, Director Marketing, Samsonite South Asia.

The JWT creative team worked alongside Schtung Music (Morton Wilson) and their team who helped to put together the track. Schtung Music is a Hong Kong based music production house.

The 2013 ‘Take on the World’ campaign is a sequel to the 2012 campaign, which also showed trendy, active, young travellers from all over the world excitedly running from one city to another, passing their colourful American Tourister luggage to each other as if they were passing on a fun adventure. Sales for the brand, especially the Prismo range featured in the campaign, soared through 2012, and remain one of their best-selling product ranges this year.

‘Take on the World’ is meant to evoke that rush of excitement we feel when we’re about to go on a great trip, especially from the perspective of today’s young and optimistic travellers who are eager to see the world,” said Lo Sheung Yan, Chairman, Asia Pacific Creative Council, JWT.

Vivolite is made with American Tourister’s new patented PressPro technology, which allowed American Tourister to create the lightest hardcase luggage they’ve ever produced, starting at just 2.5 kg for the 55 cm cabin-sized model!

The 2013 campaign marks a landmark for American Tourister, which celebrates its 80th anniversary this year. American Tourister was founded in 1933 in Rhode Island, New York, and made the world’s first moulded luggage in 1955, which quickly became known for its remarkable toughness. The brand is still trusted for its products’ durability to this day.

Location of the shoot: Paris