Zee bets big on new show on the life of Buddha

To start on September 8, each of the 52 episodes every Sunday will be of one-hour duration. It is dream project for Dr BK Modi of Spice Studios. It replaces Ramayana on the channel which is ending 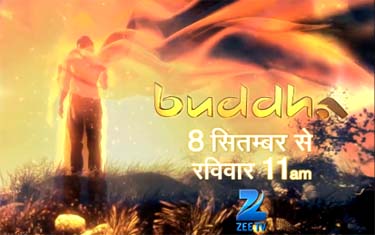 Zee bets big on new show on the life of Buddha

To start on September 8, each of the 52 episodes every Sunday will be of one-hour duration. It is dream project for Dr BK Modi of Spice Studios. It replaces Ramayana on the channel which is ending  Sohini Sen | Mumbai | September 3, 2013

Zee TV announced yesterday its newest fiction show, Buddha. The show, based on the early life of Gautam Buddha, will be telecast every Sunday at 11 AM. "This is a special show for me. I have been a believer in the Buddha. But, though the story is being unravelled through this show, in my mind Buddha remains more than just an individual. Buddha is a concept. And using those concepts and teachings we can tackle those problems which humanity is facing today," said Shubhash Chandra, Chairman, Zee Entertainment Enterprises (ZEEL) and Essel Group. The show is being produced by Spice Studios. Spice Group founder and Chairman, Dr BK Modi, said, “It is surprising that in spite of the fact that Buddha's search for the ultimate truth was answered under the Bodhi Tree which is in this country, we have never had a show or a movie talking about him. We have had Mahabharata and Ramayana which in their time have been able to keep audiences glued to their seats. I assure you, after you watch the story of Buddha unfold, you will understand how great a story this is.” The show which starts on September 8, 2013 replaces Ramayana which is ending. The show will be spread over 52 episodes of one hour. As Modi said, “The story of Buddha is so vast and complex that one needs at least an hour to tell a part of this story. And with a week to go in between episodes, viewers will also be able to look back and think about the story.” Boasting of an impressive cast which includes Kabir Bedi, Samir Dharmadhikari, Nigaar Khan among others, the show will be shown on ZEE 's international stations as well. Bedi, who had incidentally lived as a Buddhist monk for a year long ago, makes a comeback to television through this show. The show has been shot on a grand scale on a five-acre plot in Film City. State of the art 3D graphics have been used to create the look and feel of the bygone era. To make sure that there is no misrepresentation of facts, the channel has thoroughly researched the story of Buddha. They have also written to different Buddhist communities in and around Asia for help and guidance. To make sure that the show does not hurt the sensibilities of any religion, they have made sure to focus on the life of Buddha prior to the birth of the religion of Buddhism. Bharat Ranga, Chief Content and Creative Officer, ZEE, pointed out, “We had to make this show. The audience or the general public is not much aware of the life and story of Buddha. Yes, we have all heard about him. We have read about him, maybe in school or some other time. But there are so many ideas which are not true. Or which are not known. The show will teach us a lot.” The story of Buddha, a dream for Modi, was supposed to be made into a movie. However, the scope and details of the small screen is much bigger according to the producer, and so he decided to tie up with ZEE. The international audience has not been ignored though. The show is being is released simultaneously in India and abroad. It is also being dubbed in the local languages in UAE, Russia, Malayasia, etc. The on-air campaign began two weeks ago while the off-air campaign started over the weekend. The channel is using aggressive campaigning tactics to make sure that the show reaches the maximum audience, both in India and abroad.