India’s first national Dumb Charades competition for media agencies, which kicks off in Delhi today, has received an overwhelming response. Mumbai and Bangalore are next in line 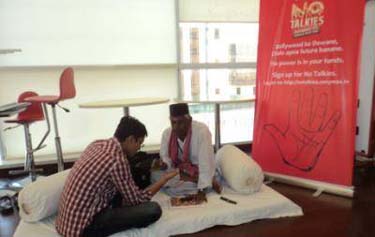 India’s first national Dumb Charades competition for media agencies, which kicks off in Delhi today, has received an overwhelming response. Mumbai and Bangalore are next in line

The agencies witnessed promoters who helped eager enthusiasts to register themselves for the competition. A mascot called ‘Ungli Baba’ was seen in media agency hubs using hand motifs to give a feel of the activity. The aficionados had a chance to get their hand read by an astrologer who was present in participant’s office. Max also put up posters, desktop pop-ups and standees inside the agencies to create buzz.

Mona Jain from Vivaki Exchange said, “No Talkies is an interesting initiative undertaken for the first time. It also goes back to the DNA of the channel. Earlier the industry was very small and people were well connected. Now the scenario is different. The industry has expanded, so it will be a good opportunity to meet and interact with new people.”

“The initiative is very interesting as this kind of activity has never been done before. ‘No Talkies’ is supposed to be an interactive game and I am waiting for it. Normally, people bond differently but with a game like dumb charades the bonding will happen uniquely. The game itself is very engaging and people will interact with each other through it. Also, Dumb Charades is all about movies and it gets back to the genre of Max,” said Ramachandran Venkatasubramanian of Lintas

Stating the distinctiveness of No Talkies, Basab Dutta Chowdhry of Madison said, “I think it’s a great initiative taken by Max. This is a new niche initiative where everybody can participate. There are very few initiatives like these that give a chance to everyone to participate. Also, the unique specialty about No Talkies is that it’s Dumb Charades which we have played since childhood, and Max being a Bollywood movie channel, No Talkies is in sync with the channel.”

Vidyadhar Kale, General Manager of Maxus, said, “No Talkies is specially designed for media agencies which makes it unique. There are a lot of social gatherings and different programmes or events for agencies which happen on a regular basis but this one is a fresh concept and one to look forward to. Dumb Charades will bring out the best acting potential in all the participants. The industry is very fast paced and such activities are a good break from the monotonous regime.”