Colors to kick-start October with '24' 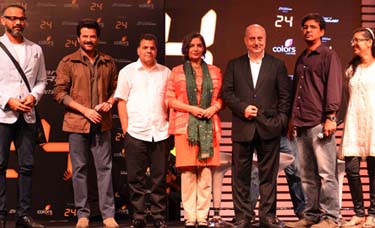 Colors to kick-start October with '24'

Colors has finally put to rest all questions about their new show, the internationally popular ‘24’, now adapted to the Indian screen. The Indian version of the hit espionage series will hit the small screen on October 4, 2013 at 10 PM. It will come in the primetime slot on Fridays and Saturdays.

To make way for this new show, Colors has decided to move its popular 'Comedy Nights with Kapil' to a Sunday only 10 pm slot for the time being.

"We have so many shows right now, we are always trying to figure out when to put which show. Kapil with Jhalak and Comedy Nights also needed to rest. So we decided that for the time being the show will only be there on Sundays. Once 24 is over, we will bring him back on Saturdays as well," said Raj Nayak, CEO, Colors.

The time slot has been decided strategically, keeping in mind the existing followers of their other popular franchises – Bigg Boss, Balika Vadhu, etc. By putting 24 just after Big Boss, the channel hopes that it will be an appointment viewing property and their stranglehold will increase.

The show revolves around Anil Kapoor as ATU chief Jai Singh Rathod and his race against time. The story, as apparent from the trailer, is about Rathod who has to face certain challenges thrown at him as ATU chief – threats to the nation and his personal problems. There is also a threat to the prime ministerial candidate, Aditya Singhania (played by Neil Bhoopalam). It promises to be an edgy, fast-paced and action-packed series which will notch the bar higher for Indian fiction television.

Manisha Sharma, Weekend Programming Head, Colors, said, “It is the only country which adapted the show. Many other countries showed it or telecast it in their own language. But we are the only one who re-shot it and for that we needed to write a script and do the whole thing. We had to tweak it a bit to suit the Indian audience, but the excitement and adventure are all still there."

"The whole point of doing an international format show is that we already have a format to follow. But we don't have the budget that is there in the USA – we probably one-twentieth of their budget. However, we have a big marketing plan. Our other shows, Bigg Boss and Jhalak,.are doing their 4th, 5th, 6th seasons and so on. We need to just make them aware when a new season is coming in. But here, for 24, we need to educate and inform the audience," added Nayak.

Presented by Tata Safari Storme, 24 will run for 12 weeks – two episodes per week. What sets the show apart is that it is a fictional show but with real-time narration. This essentially means that each minute of the 24 hours of the story will translate to one minute of screen time for the show – making up 24 one-hour episodes in season 1.

The marketing plan for the show covers all possible mediums. Anil Kapoor, co-producer of the show, will be travelling to different cities and interact with people there. The show will also be publicised through movies, an initiative that started with Chennai Express, Grand Masti, etc. Anil Kapoor will also make an appearance in other Colors properties including Comedy Nights with Kapil and Bigg Boss, followed by fiction shows such as Balika Vadhu and Madhubala.

"We are promoting this just like a movie, keeping in mind the look and feel of the show. On radio, every 23 minutes there will be a communication about the show across stations. In outdoor we have different ideas, and we are also promoting it across channels," said Rajesh Iyer, Vice-President, Marketing, Colors.

Digital is obviously a big part of every show's marketing now. 24 is no exception. Vivek Srivastava, Digital Head, Colors, explained, "Keeping in mind that it will be only 24 episodes, we have used a lot of digital because this is the only medium where engagement happens. We have used digital to establish the content of the show and the characters of the show – be it the microsite we have launched, the content we are running around the programme, the contests we run, the Twitter hashtags or the Facebook pages. We have already established Jai Singh Rathod's character. In the last 7 to 10 days of the property, we are trying to establish other parts of the show – his family, ATU, etc.”

Srivastava added, “The microsite will get enhanced once the show has been launched and will include the promos, trivia and all the behind the scenes shots from 24. Every strong 24 fan will have a destination to go to, to discover more about the property, discuss the property, etc. There will also be mobile interaction ideas for the show.”

Lead actor Anil Kapoor commented, “I couldn’t have asked for a better team of actors than the ones on 24. Everybody is a hero on the show and the precision and technique that each one of them use to portray their individual characters are unique. Their never-say-die attitude and the passion and enthusiasm put in by each one of them makes me want to strive harder and perform better and better.”

“Creating a body of work such as 24 is a lifetime opportunity where I could use my craft to the fullest. I have attempted to create a visual medley of powerful characters led by Jai Singh Rathod. I am confident audiences will love each and every character and see how all of them in their own way contribute to the twists and turns of 24,” said Abhinay Deo, Director.