Zee Media launches 4th edition of ‘My Earth My Duty’ 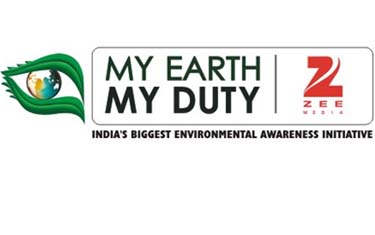 Zee Media launches 4th edition of ‘My Earth My Duty’

Zee Media Corporation Ltd., India’s largest news network, has launched the fourth edition of India’s biggest environment awareness initiative ‘My Earth My Duty’, today. My Earth My Duty has proven to be an essential platform provided by an Indian media house in bringing behavioral change in Indian Citizenship, especially youth. Since 2010, the initiative has been able to sensitize and encourage people to take adequate steps to conserve Earth and more so for our children and grandchildren.

Zee Media through My Earth My Duty 2013 aims at encouraging people to participate in Awareness Sessions and Pan-India Plantation Drive. The month long activities will start from August 1, across various cities of India. Under the first phase, Indian citizens will be educated about environmental degradation and generate concern about the hazardous changes taking place in the environment with a view to motivate them to take positive consequential actions. The campaign will mobilize people to adopt eco-friendly measures in their daily lives and bring about a change in their outlook.

Discussions about the changing environment and handy solutions to fight against it, pledge ceremony, cultural programs on the theme, signature campaigns and rallies across the city would mark the ground activities being conducted in over 15 cities across the Nation.

Alok Agrawal, CEO, Zee Media Corporation Ltd said, “Our effort is to create environmental awareness through My Earth My Duty among the youngsters who are the future of India. Inculcating awareness amongst them will promise a greener Earth both for themselves as well as their successors. Zee Media Corp is committed to carry on this campaign till Earth restores its normal ecological system. Zee Media has always been on the forefront of bringing around a positive change in the lives of people it touches and this is what it is trying to promote through this initiative as well.”

A week long pan-India plantation drive will start from 15th August to mark the 66th year of India’s Independence mobilizing citizens for highest number of plantation. Zee Media hopes its 100 million viewers will come out with supporting hand to contribute in this Green Revolution which is the only alternative to control environmental degradation.

As a responsible media house, Zee Media has been committed to engage the youth of India whose contribution is crucial for a greener and sustainable future. In a short span of time My earth My Duty has been recognized as India’s biggest environmental awareness initiative and received well by over 50 million youngsters, who along with other partners of this initiative have planted more than 1.4 crore trees in 1.5 lakh villages. Dignitaries such as Dr APJ Abdul Kalam, Amitabh Bachchan, Aamir Khan, Kapil Dev, Irfan Khan, have associated with this noble initiative.

Rohit Kumar, VP, Zee Media Corporation Ltd said, “While global warming, natural calamities and solutions therein have become the talk of the town after witnessing disasters in Uttarakhand and Tsunami in coastal regions sometime back, not much initiative has been taken to increase environmental consciousness. Zee Media Corp, as a responsible and environmentally conscious media house, has been constantly trying to address this national concern and raise awareness towards conserving the environment under its My Earth My Duty initiative, since last couple of years. We hope to make a significant contribution towards a greener and brighter future.”

In fact in an unparallel achievement for any initiative, ‘My Earth My Duty’ was selected to represent India’s action against Climate Change at the 2012 Earth Summit in Rio de Janeiro, Brazil. The revolutionary movement has also been recognized by Limca Book of Records besides winning several coveted awards.