Rising Star: Vaibhav Pandey, Out of the Box

Vaibhav joined Out of the Box in Delhi in 2010, simply on a whim. He dreamt of being a pilot but was rejected on medical grounds. So he responded to an online ad of the agency. He was voted ‘All Star’ at Delhi’s Portfolio Night hosted by Leo Burnett, and is flying next month to Detroit, USA, to work for a week with the Ford global campaign team 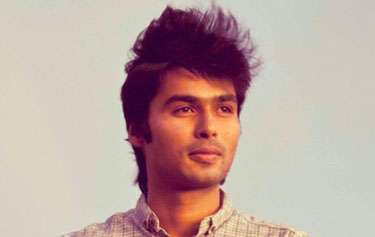 Rising Star: Vaibhav Pandey, Out of the Box

Vaibhav joined Out of the Box in Delhi in 2010, simply on a whim. He dreamt of being a pilot but was rejected on medical grounds. So he responded to an online ad of the agency. He was voted ‘All Star’ at Delhi’s Portfolio Night hosted by Leo Burnett, and is flying next month to Detroit, USA, to work for a week with the Ford global campaign team

When Vaibhav Pandey used to scribble poems in his school notebooks, or tried his hand at doodling on the school walls, he never thought that one day this very trait would lead him to a career in advertising.

Vaibhav, as a student of BSc in Delhi University, had no plans to join advertising. His goal was to become a pilot. Having cleared all his exams, he got turned down during the medical test due to high blood pressure. "What those buggers didn’t realise is that I was too damn excited," laughs Pandey.

Vaibhav joined Out of the Box in Delhi in 2010. Though initially he did not even know the difference between 'copyrighting’ and ‘copywriting’, he soon picked up the trade craft. Learning on the job is the only way to learn, according to him. Ask him why he is in advertising and he replies promptly, "May be I am destined for it. Or, I am not good at anything else."

His entry into the ad world was a chance factor. Responding to an online ad on a whim, Vaibhav ended up meeting Viral Pandya and Sabu Paul. The duo hired him as a junior writer at Out of the Box. Under their leadership, Vaibhav went on to work on Mother’s Pride Preschool, Presidium Senior Secondary School, Haldiram’s, etc. Recognition came in the early stages itself. A brochure he worked on for Mother’s Pride won Gold at Cannes Lions and also at GoaFest.

"At Out of the Box, we are ruthless when it comes to work. But beyond that, we are like a family," adds Vaibhav, brushing off all talks of rivalry and competition among colleagues.

He is not one to leave the industry just because there are controversies and fights. He loves the work he does because of the novelty each day brings.

Vaibhav's time in the spotlight came with his entering the Portfolio Night contest in Delhi. He entered the contest after asking Viral if he could. All he wanted was to know how good he really was. With Viral's encouragement, he put together his portfolio – which funnily enough even had the poems that got him the job at Out of the Box in the first place!

In Delhi's first ever Portfolio Night, hosted by Leo Burnett, Vaibhav stood head to head with almost 60 other youngsters from the field. Some of the biggest creative names in the ad industry – KV Sridhar ‘Pops’, Agnello Dias, Prathap Suthan, Rajiv Rao, KS Chakravarthy ‘Chax’ to name a few – judged and evaluated his work. At the end of the evening, he was voted Delhi's 'All Star' unanimously by the creative honchos!

Vaibhav humbly confesses, "I cried, I laughed, I went completely insane for quite some time. Then I called and thanked the people I work with. By the way, the high still hasn’t worn off!"

And why should it? After all, not many young professionals can boast of flying to the USA, hosted by Ford Company at its Detroit headquarters, to work for a week with the Ford global campaign team! That is exactly what Vaibhav would be doing next month, and boy, is he excited.

At the same time, he is keenly aware that the ad fraternity in the country will be watching him. His focus for now is to represent India at the Portfolio Night Global Event, and make the country proud.

Whether the work culture in the two countries differ or not, whether he finds one more suitable than the other, all that he is yet find out.

The recent award show controversies have not gone unnoticed by him. Vaibhav's take is that insecurity gives rise to bickering and politics in the field. "But then who cares when you have like-minded people working together for the cause of creativity. At least, this is what we do at Out of the Box."

But he knows that there are some problems in the way the industry functions in the country right now. The problem, according to him, is that many people do not work anymore. There is a sea of difference between the ads sent for awards and the ones that get released. Vaibhav wonders if, as advertising professionals, they are here to do scams or provide creative solutions for clients.

He seems to be deeply troubled by the idea that a lot of people feel that the fun part has diminished in advertising. He refutes this argument by saying that people like him wouldn't have been there then.

Vaibhav wishes that people would shed the negativity and cynicism. "I would also like people in the industry to work together, and put up a common front, at least when it comes to representing India abroad," he says.

Ask him if new joinees need to know anything specific, he is quick to point out that one should only join advertising for the right reasons.

"The only thing that takes you ahead is your work. Be part of a place that hasn’t completely sold out, and led by people who care for quality. Advertising may not be as glamorous as it’s made out to be, but it’s a lot of fun. Any day, it beats working in a bank. Or being an airline pilot,” he says with a twinkle in his eye.

Some of works by Vaibhav Pandey:

The curious case of bunty. Click on the image to enlarge.

The curious case of chinki. Click on the image to enlarge.