The three TVCs communicate the ‘When you gotta go, you gotta go’ messaging and highlight the features of redBus.in 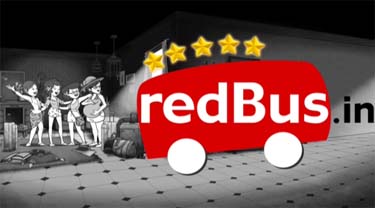 The three TVCs communicate the ‘When you gotta go, you gotta go’ messaging and highlight the features of redBus.in

Bus ticketing company redBus.in kick-started its television campaign with the ‘Baby’ ad, which was followed by the ‘Meen curry’ and ‘Reunion’ ads. The animatic TVCs have been conceptualised by Lowe Lintas Bangalore with the message ‘When you gotta go, you gotta go’.

The concept took shape six years ago when Phanindra Sama, a BITS Pilani techie working in Bangalore, came in for a rude shock when he decided to go home for Diwali. Having made up his mind at the last minute, Sama was unable to get a single ticket home. He ran from agent to agent, hoping to get a seat, but failed. Six years later, Sama and his college friends are running bus ticketing company – redBus.in. Clocking over Rs 600 crore in ticket sales last year, the company is targeting the Rs 1,000-crore mark this year. From starting off from building a virtually non-existent market, the company is now spearheading change and innovation.

However, India being a very large market, there still exists the potential to grow by appealing to offline consumers travelling on either work or holidays. After all who wouldn’t want to simplify the process by booking bus tickets from the comfort of their home?

The objective given to Lowe Lintas & Partners was simple: grow the category by converting offline ticket buyers to redBus.in and its Call-&-Book service customers, while eventually creating mass awareness and dramatically increasing traffic for redBus, through a differentiated positioning for the brand.

The agency soon realised that while redBus has made the bus ticketing experience so much easier, the company’s prime focus has remained the same – ensure customers get bus tickets, at any time, no matter what – there are some moments in life that just can’t be missed, be it Diwali celebrations at home, the birth of a grandchild, or simply a yearning for mom’s most delicious dish. And nothing should come in between them and their travel – not an employer, not work and certainly not the lack of a transport service. From this thought came the punchline ‘When you gotta go, you gotta go’.

The ads also highlighted some of the key features of redBus, like mobile app, tips and ratings, etc., while staying true to the company’s philosophy of simplicity, transparency and hassle-free travel.

Rajesh Ramaswamy, Group Creative Director, Lowe Lintas Bangalore, said, “The idea was simple. In fact, the expression ‘When you gotta go, you gotta go’ says it all. We just put our heads together to think of compelling situations when you had to had to had to go – simple situations that most of us would relate to. And we knew that it would shape up well the minute we jammed with Suresh on giving it a unique style. And full credit to the client who sensed the potential of this idea and gave us their full support.”

GV Krishnan, Executive Director, Lowe Lintas Bangalore, said, “redBus.in approached us with a clear mandate to create a differentiated positioning for the brand that will lead to awareness and drastically increase traffic to the site. Our task, in short, was to establish redBus.in as an expert and the undisputed leader in bus ticketing.”

Krishnan further said, “During our internal discussions, we hit upon the insight that almost all bus journeys are unplanned, unavoidable and therefore last-minute. Placing the brand bang in the middle of this truism made enormous sense. With its innovative and transparent services, redBus.in is truly the facilitator of such journeys. The proposition ‘When you gotta go, you gotta go’ followed. The creative team, led by Rajesh Ramaswamy, then came up with insightful scripts – some drawn from real life – and a clutter-breaking execution. We are really proud of this one!”