Overall television viewership in every census and IRS has gone up, sale of television sets is going up annually, but the collective viewership is going down...So who is delivering the audiences? ...I believe it has been said that bad data is better than no data. Someone would need to explain to me how that can be 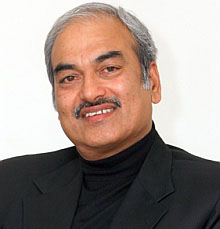 “Overall television viewership in every census and IRS has gone up, sale of television sets is going up annually, but the collective viewership is going down...So who is delivering the audiences? ...I believe it has been said that bad data is better than no data. Someone would need to explain to me how that can be”

Beginning with recent pullouts by leading broadcasters from TAM, will it be appropriate to say that NDTV’s law suit led to the current situation?

It is not for me to say that. We have been raising issues with TAM right from 2004 and our law suit has all the details. In fact, there is only one solution available to deal with the issue, not only with TAM but with any rating system, and that is to have an adequate panel size. That is where all the flaws and problems come from.

But TAM says that it has been expanding and it has grown from 3,500 panels in the beginning to 9,500 now. How can they be blamed for not expanding?

The Amit Mitra Committee on the subject says there should be 30,000 metered homes. Broadcasters want real action, not something superficial.

In some media reports, TAM is believed to have hinted that if broadcasters insist, they may roll back the LC1 market. What’s your take on this?

Who is asking for that? Which broadcaster has said that? It’s like saying Delhi needs electricity, so we will take it from some other city. How can anyone say something like that? We say cover the whole country adequately. Eventually, when we have our own ratings system under BARC, we will ensure an adequate panel size – whatever is the requirement to cover all the television viewing markets across the country. That may be somewhere between 20,000 and 30,000 meters depending on the study. The solution is definitely not increasing the panel size from 8,500 to 9,500 in a country which has over 7,500 towns and cities and a population of over 1.25 billion!

The moment Phase 2 of digitisation took place, within no time many flaws crept in.  For example, in one week Madhya Pradesh started getting higher weightage than Mumbai! I believe Guwahati’s market weightage became higher than Delhi and Mumbai put together! So these are the issues, not LC1. Of course we want all LC1 markets covered. In fact, we want the whole TV population to be covered.

Let me ask you one thing. Will you predict an exit poll based on a conversation with ten people? Yet, on ten boxes you are determining the performance of English business channels. Between Delhi and Mumbai, business channels are being judged on less than 20 boxes. How can this even be acceptable? The problem with the current rating system is far more fundamental. To say that broadcasters don’t want LC1 market is false and just an attempt to deviate from the issue.

So what’s the way forward?

By April 1 next year, BARC will have its own ratings system with different organisations for establishing people meters, analysing the data and disseminating the data. And it has got offers from world renowned technology providers.

What about the alleged charges of corruption in data collection?

I’m not saying corruption will be removed altogether. However, if you have an adequate panel size, then even if one or two homes get subverted, it doesn’t impact in a big way as it does today. Corruption becomes difficult. Today, if one household with a people meter watches one business channel or an English channel for an entire day, weightages change and everyone else’s data comes down.

It is also said that people living in bungalows don’t give access to field staff for data collection every week from their drawing rooms. So, the meters are installed in their drivers’ rooms but the data is still considered as the viewing habit of SEC A. How could this issue be tackled?

Obviously such aberrations have to be checked. If they say SEC A, then it has to be SEC A. Today, you keep saying that the locations of people meters are confidential, but many know about the locations and then subversion takes place. This was openly acknowledged in the TRAI Open House recently. That has to stop.

Shouldn’t NDTV have pulled out of TAM when it filed the law suit instead of waiting for nine months to take this step?

Has the issue of withdrawing TAM subscriptions been discussed within IBF or NBA? What really are the specific charges labelled against TAM?

It was the huge fluctuation of data, inadequate sample size and lack of proper explanations or improvement that led to frustration and reaction.

Despite an advisory by IBF to pull out of TAM, it seems to be a divided house among broadcasters. Why this pussy-footing by many networks/channels?

There was no advisory and broadcasters took individual decisions to pull out. I believe many did, including the major networks.

Significantly, when BestMediaInfo spoke to the TAM CEO, he challenged broadcasters to come up with a single instance where TAM had not resolved their queries. Any comment?

What really is a response on a query? That yes, we have received your complaint and will look into it! Solve the problem instead is what we have been saying all along. No solution to the actual problem has been provided.

The TAM CEO also mentioned that broadcasters made a mistake by taking TAM ratings “emotionally and being over-dependant on this metric”. Rather, in his view, research based on a handful of samples should be indicative. What’s your view?

The TAM CEO has also blamed broadcasters for not providing sufficient funding for expansion. How do you defend this charge?

I think there are two aspects to it. One is that any ratings agency is meant to deliver a robust system on its own.  Secondly, I think they need to find a way to make their system cost-effective which will allow expansions to take place. If you ask broadcasters, most will say that they already pay too much for data which has flaws.

Even as broadcasters have pulled out or are in the process of withdrawing from TAM, AAAI and ISA have openly come out in TAM’s support. Isn’t it an uncomfortable situation?

I believe it has been said that bad data is better than no data. Someone would need to explain to me how that can be? Should this philosophy apply to all walks of commercial life? Bad is better than nothing? I have always been taught that if I can’t do something properly, I shouldn’t do it. So, sorry, but I can’t understand how bad can be good.

The overall television viewership in every census and IRS has gone up, sale of television sets is going up annually, but the collective viewership is going down. In an ad cap scenario, the hike in ad rates is not going to be easy with such data because advertisers may say that you are not delivering audiences. But we are, and it is increasing every year. If not us, then who is delivering the audiences?

Most importantly, how will TV channels sell airtime in the absence of any currency for almost nine months from now till the BARC system is in place?

The industry will throw up alternate methods like surveys and so on. Perception is also an important factor. Also, perhaps have a different way even for TAM to report. Let’s see.

If we talk about perception as a core selling point, niche channels may have an advantage. So, does this mean that the channels which depended solely on numbers will face tough times?

I’m happy to depend on numbers when the numbers are robust. But here the situation is different. Till the market corrects itself and BARC’s own ratings system goes live, perception and alternate methods as mentioned earlier will have to play a role.