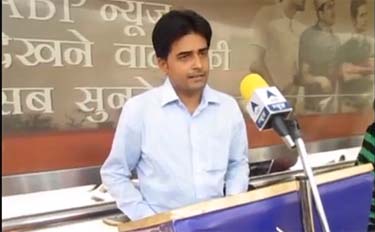 ABP News, along with its OOH agency Milestone Brandcom, has rolled out an empowering campaign to establish brand identity. The campaign saw a mix of outdoor and experiential marketing programmes. The highly visible campaign became the talk of the town and also the debate show of the channel ‘Maha-Behas’.

The commoditisation of news has made it imperative for TV channels to mark out a strong differentiator and highlight their brand identity. ABP News which went in for a revamp recently, felt the need to reinstate its identity with a high voltage communication.

Vikas Singh, Marketing Manager, ABP Group, said, “With digitisation consumers have got more choices in terms of channels. According to a Times research, consumers generally have 2-3 channels that they watch regularly and we have to be in those repertoire of channels. Therefore, there was a need to build the channel as a brand. It was necessary because post last year’s change, which was hugely successful for us, we needed to strengthen the brand name and therefore we decided to come up with this campaign.”

All news channels claim to be fast, accurate and true, but ABP News positioned itself as a different and unique one and connected with the audience through this campaign. The channel’s tagline says ‘ABP dekhne walo ki sab sunte’ (everyone listens to those who watch ABP News). “The idea was to build the channel equity, if we say we are the fastest or first, these are very generic points. Our channel promise is that we keep viewers ahead and we empower them to take better decisions. In India, we all are very good speakers and nobody wants to listen! Therefore, we came up with the tagline ‘ABP dekhne walo ki sab sunte hai’ as a differentiator from other channels,” Singh added.

The campaign was designed keeping in mind this tagline and the on-going TVC. The creative showcased the conversation amongst a group of people which was highlighted with 3D podiums and real microphones on billboards at Delhi’s DND flyover. “The campaign is about making people aware that everyone listens to those who watch ABP News channel. We had to create the idea around this theme. To build connect with the theme line we installed different elements like podium and microphones on OOH formats,” said Prashant Mishra, Regional Head (North) - OOH, Milestone Brandcom.

The media planning was designed strategically considering the touch-points related to the channel and its audience. The cities were primarily selected on the basis of Hindi news channel listeners. The campaign was highly visible in Delhi, UP and Patna. “OOH is a very cost effective and unique medium; therefore, it has a lot of clutter. The idea was to select those places which are less cluttered. We didn’t go for hoardings in Mumbai because they are very expensive and also the brand would get lost there unless we have adequate money to pump in there,” said ABP News’ Singh.

“The target audience was more of mass audience. News is something that everybody listens to, especially Hindi news. The campaign was thus mostly concentrated in UP, UP West, Patna and Delhi because at these places people consider news as part of the entire entertainment package,” added Mishra.

The OOH campaign was accompanied with activation executed across Delhi, Lucknow, Kanpur and Agra. BQS formats were utilised to organise the activity. A mammoth hand holding a microphone was placed next to BQS along with the podium where audience could speak and share their views live. In order to make the activation more prominent, the activation was linked to one of their popular debate shows called ‘Maha-Behas’ where the views were broadcast in between the show.

Along with that, Radio City also included the view points in their radio show. “The activation was organised to make the local audience participate. The idea was to make them empowered and give them a feel of being listened to. The activation was taken to another level and connected with the live ABP TV show Maha-Behas,” explained Mishra.

The brand-medium equation: Sharing his views on ABP’s equation with the OOH medium, Singh said, “OOH is a very interesting reminder medium and builds quick awareness. We had a full TV campaign on our channels and GECs and we were looking at a reach of 90 per cent. So we were saturating the market but we needed this message to constantly reach the consumer as a reminder. Therefore, we came up with three renditions. TV is one rendition but you have different strata of society and different TGs like youngsters, office-goers, SEC A, etc. We needed to target all of them and show that ABP appeals to all of them, which we were unable to do through TV alone.”

He added, “We are also doing innovations where we are giving opportunities to viewers to air their opinions on a topic which is in line with brand promise ‘ABP sunne walo ki sab sunte hai’. This type of innovation is not possible on TV. Two things can be said about the OOH medium: first, it acts as a reminder medium and, second, it gives a wider width of reach to a greater variety of people. In some places, where there is a huge electricity problem, TV campaigns may not work. So radio and OOH are the only alternatives. Outdoor is a key pillar.”

“The challenge was more of managing the crowd during the activation as everybody wants to say something. We had to filter the best bytes in a short duration. Managing the activation and meeting the deadlines were also big tasks. Besides, we had to make sure traffic didn’t get hampered. Added to it was the heat of the scorching summer. Last but not the least was to ensure the safety of the show anchor, given the huge crowds,” summed up Milestone Brandcom’s Mishra about the challenges involved in managing this campaign.

Response: According to the first cut received by the agency and the brand, the campaign seems to have been well received. Word of mouth obviously worked very well in this case. Media planners and agencies have been talking about it and it has created a lot of buzz in the market. The activation also got covered in a lot of publications. The brand believes that this will help in increasing their brand equity at the end of a few months’ time when they will track it.