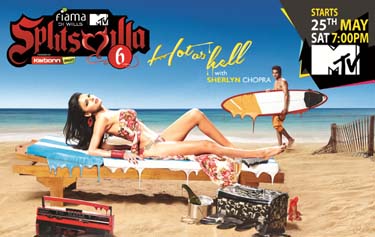 MTV is back with an all new season of ‘MTV Splitsvilla’ to make it hot as hell in the game of love. The show in its 6th season will see eight boys and eight girls vie for love and victory.  The war of love gets spicier than ever before as it moves to the land of spices, Kerela. The theme for MTV Splitsvilla Season 6 is ‘Hot As Hell’ and keeping in sync with the theme, sultry siren Sherlyn Chopra has been roped in along with MTV VJ Nikhil Chinapa to host the show. The show is premiering on May 25, and will air every Saturday at 7 PM.

The war of love gets edgy, raw, and wild and raises the bar this season as the sizzling Sherlyn Chopra will play cupid to the contestants. Only the hotter and spicier will survive in this game of love to win the enviable crown of the king and queen. This season’s instincts of survival will be based on seduction, sex appeal and only the hotter and bolder will emerge as survivors. This season also introduces a new feature called ‘Hotness Quotient’ that will be judged by Sherlyn Chopra. The focus will be on the physical attributes of the contestants where they will have to prove they are hot enough to be on the show. Apart from this, the contestants will also be judged basis desirability factor that is not limited to looks alone but attitude, strength, competitiveness and confidence.

Aditya Swamy, EVP & Channel Head, MTV India, said, “We are excited about adding a new twist into the format and the hottest show on TV just got hotter. It’s this freshness that has ensured that the show is successfully entering the 6th season. The Splitvsilla brand has become so popular that we now have several extensions. Web exclusives like Break Diaries & Lovisodes, Splitsvilla themed parties across the country, a range of Spiltsvilla lingerie are just some of the things we have added to the franchise over the years. It is undoubtedly the No.1. Romance reality show for the youth.”

Sherlyn Chopra commented, “I'm quite excited about being the host of this uber cool youth show as it provides me with ample scope to express my individuality in ways more than one. In the land of spices, with all the young and hot contestants, it is going to be a helluva great experience. I am really looking forward to the audience response.”

MTV VJ Nikhil Chinapa added, "It's been six years since we started the game of love and I am excited to be back with a brand new season of Splitsvilla. Each season keeps getting better. This year the game of love is going to be more challenging, yet fun with new twists and turns. It’s not going to be an easy battle for the girls and boys."