Launched on March 30, the takes 10 am slot on Saturdays 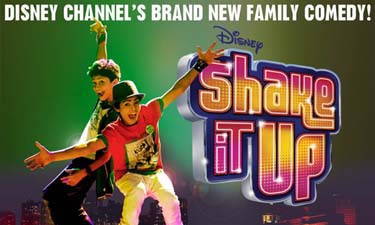 Launched on March 30, the takes 10 am slot on Saturdays

Disney Channel, India’s leading entertainment destination for kids and families premiered an energetic, dance filled buddy comedy series – “Shake It Up” on Saturday March 30 at 10 am. The series centers on the journey of best friends Neel Walia and Yash Mehta, two high-spirited teenage boys, whose dreams of becoming professional dancers are realized when they land roles as background dancers on the most popular teen dance show, "Shake It Up, Mumbai!”

While the best friends move and master the challenging moves for each week's dance show, they revel in their newfound status, but also quickly learn they'll need more than fancy footwork to match wits with the show's other dancers, notably the highly competitive siblings, Manjot and Mandeep. In trying to manage their school, home and studio responsibilities, the boys constantly get into hilarious scrapes and fun adventures, some of which will also test their friendship. But, as always, at the end, through their jumbles and mix-ups, the boys learn valuable life lessons and arrive at the right conclusions, whether it is about winning or losing and sharing or caring.

“At the heart of Disney Channel lies a passion for wonderful storytelling, added with a local flavor that establishes an emotional connection with kids and their families. Through our new offering “Shake It Up”, Disney Channel is able to offer a unique blend of music and dance as an expression, through a narrative that fulfills our philosophy of encouraging kids to follow their dreams.” said Devika Prabhu, director programming, kids network, Disney-UTV

Starring in the series are Sparsh Shrivastava as Neel Walia; Ojas as Yash Mehta; little Faiq as Aayush, Preet Rajput as Jai Mehta, Aalam Khan as Dheeraj, Riddhi Arora and Ayush Narang as the twins Mandeep and Manjot, veteran actress Asawari Joshi as Neel’s mom and television personality Akshat Saluja as Shekhar – host of ‘Shake It Up, Mumbai’