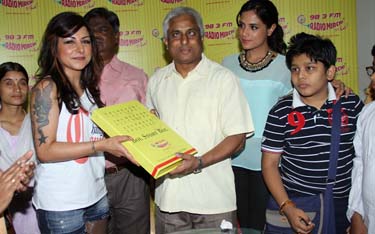 Radio Mirchi, Mumbai’s hottest radio station turned a year younger on 23rd April and like every year the station commemorated its birthday with great fervor and merriment in its own Mirchidaar-style. Good cheer and celebration were the order of the day besides music, fun, frolic and sense of pride among the RJs on the station’s BIG day!!! The radio station that has continuously ruled the lives of Mumbaikars celebrated its turning 11 by spreading sunshine and smiles with their own unique ‘Bol Story Bol’ initiative in association with the National Association for the Blind (NAB). With this campaign, the station recorded 11 Mirchi Audio Books of various children’s tales. These special books were unveiled in a cake-cutting ceremony in the presence of Bollywood diva Richa Chadda and the very effervescent Hard Kaur, joined by the charming Meiyang Chang. The trio along with the RJs presented these audio books to NAB.

Every year, Mirchi Mumbai endeavors to bring in its birthday with a unique initiative. The station this year as well aimed at giving back to the city that has loved and supported them with the “Bol Story Bol” initiative. The initiative was supported by Pratham Books, with children’s stories to be made into audio books. Bollywood industry’s renowned celebrities viz Richa Chadda, Tusshar Kapoor, Anurag Kashyap, Dia Mirza, Zoya Akhtar, Ayushmann Khurana and Meiyang Changthen came forward to lend their support – and voices – to these heart-warming audio stories!

Commenting on the 11th birthday initiative, Preeti Nihalani, Cluster Head – Mumbai said, “We are 11 today and we enter into yet another year of great music, excitement and lots of FUN! Over the years Radio Mirchi has become an integral part of Mumbaikars’ lives – it is because of the city’s constant support that we have grown by leaps and bounds. We think with each year we are just getting younger in terms of content and campaigns. Even today we possess the drive to provide our listeners with even more engaging and innovative programmes. BolStoryBol is one such example. Like every year we wanted to give back to the society and with this initiative we intend to spread smiles and entertainment among the visually impaired kids.”

On launching the Mirchi Audio Books, the gorgeous Richa Chadda said, “It feels good to be a part of someone’s celebration, and Radio Mirchi is one station that has always managed to put a smile on my face right from hottest music, to witty RJs and to outstanding content. I personally enjoy taking some time out of my work schedule to spread happiness and put a smile on someone’s face. When I was asked to contribute to Mirchi Audio Books, there was no way I wanted to let this opportunity go. I am glad that I have contributed in my very little way to entertain visually impaired kids.”

Agreeing with RichaChadda, Hard Kaur said, “I am overwhelmed to see how Radio Mirchi on their 11th birthday has come together in an attempt to entertain these kids. For most of us, birthday calls for lavish celebrations and get-togethers with people we love. But Radio Mirchi has redefined celebrations by giving back to the society. It is good to see the entire team come together to thank the society in their own unique Mirchidaar style. Hope the upcoming year will be full of Music for you guys!”