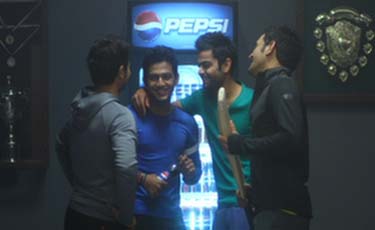 The captain of the under-19 Indian cricket team is Pepsi’s new brand ambassador and he stars in an irreverent campaign that brings him in a face-off with MS Dhoni, Virat Kohli and Sursh Raina

Pepsi has brought on board young cricketing sensation, Unmukt Chand, as its brand ambassador. Unmukt personifies Pepsi’s youthful, irreverent and “Oh Yes Abhi!” spirit. Having led the Under-19 Indian cricket team to a World Cup victory in 2012, he features in Pepsi’s new ad film that brings alive the ultimate face-off between him and the captain of the Indian cricket team, MS Dhoni, along with Virat Kohli and Suresh Raina. The fun and entertaining campaign which went on-air on March 1, captures their impatient moments and promises to engage audiences like never before.

Speaking about the campaign, Homi Battiwalla, Senior Director – Marketing (Colas, Juices and Hydration), PepsiCo India, said, “Pepsi is known to be the first brand to identify youth icons early on and tap talent with tremendous potential and credibility. We are proud to associate with Unmukt Chand, who truly reflects Pepsi’s ‘Oh Yes Abhi!’ attitude and confident that he will lead the next generation of players who personify the same philosophy. Our latest campaign takes forward the ‘Oh Yes Abhi’ philosophy and brings alive Unmukt’s impatient moments in his first ever ad-film with Dhoni, Virat Kohli and Suresh Raina. The film showcases the young emerging star impatient to be a part of the Indian cricket team which exemplifies our positioning in a fun and exciting manner.”

The TVC brings alive Pepsi’s youthful irreverence and demonstrates the ‘Oh Yes Abhi!’ moments of these Pepsi brand ambassadors. Unmukt, in his cool look, is shown waiting impatiently, all anxious to get hold of a Pepsi bottle; while Dhoni, Kohli and Raina are also waiting to get their hands on it. What we see next is an entertaining war of words between the youth icons and the rising star.

The 40-second TVC is in Hindi. The campaign takes forward Pepsi’s journey with a refreshed take on ‘Oh Yes Abhi!’ The brand had launched a mega campaign starring Ranbir Kapoor, MS Dhoni and Priyanka Chopra last month that captured their impatient moments. This month, Pepsi is taking the same thought forward with yet another entertaining and thrilling campaign.

Making of the TVC: