Premiering on March 16, the new series from the creators of Raodies will be telecast every Saturday at 6.30pm 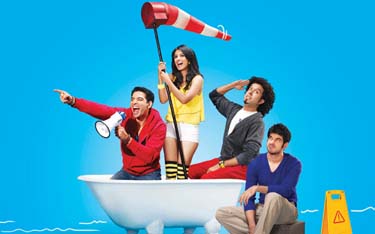 Premiering on March 16, the new series from the creators of Raodies will be telecast every Saturday at 6.30pm

MTV launches a brand new TV series, MTV Reality Stars, a space that has never been tapped before on Indian television.  Everyone knows and sees reality shows but no one knows the comedy and chaos of what goes on behind the scenes. Over the past few years, reality shows have truly captured the attention of young people and the two biggest shows for this generation are MTV Roadies and MTV Splitsvilla.  So from the makers of the biggest reality shows, comes a series which apart from other things takes a healthy dig at MTV and the madness that goes into creating these block buster reality shows. MTV Reality Stars will premiere on March 16, 2013 Saturday at 6.30pm and will be a TV series that will appeal to both reality show lovers and haters. Reality Stars promises to enthrall the audience with the concept of ‘reality’ and ‘reality shows’ like never before.

Aditya Swamy, EVP and Business Head, MTV India, says, “MTV brought reality to India and today it’s everywhere. You can love it or hate it, but you can’t run away from it. In this show, we take healthy digs at our biggest shows and the ability to laugh at ourselves has always made us more endearing to our audience. Unlike daily soaps, this is a finite series that is built around a tight script, a truly delightful cast and film level production standards. This is the future of Indian television and this is a genre we are committed to building.

Reality Stars is a 12 episode, 22-minute comedy TV series based on the lives of four crazy friends - Krish, Kuldeep, Zameer and Tania, who get caught in the mad, mad world of reality television and their reality gets BAJAOED!

Krish writes reality shows, Kuldeep wants to be on a reality show, Tania is a reality show reject and Zameer hates reality shows. The story of these four takes off from the auditions of MTV Rejects, a show that tries to find the country’s biggest Reject, and from that fateful day, everything they have ever wanted in life… does *not* happen. In fact, as the reality of reality TV is revealed, things with these 4 go SO wrong that these four, who had come to Mumbai to be superstars, end up being reality stars!

Reality Stars is a full-on comedy that delves into some of the most baffling questions of our times: Are the girls on Splitsvilla really that bitchy or is there a reality school that trains them? Is Raghu really bald or does he shave his head for television? And of course, is Reality TV *actually* real?

The campaign for the show will see 360 degree marketing promotion through various media verticals, including on-air promotions, digital activations, and on ground activities. The campaign will also see a contest run across 200 plus colleges in the country where a few selected students will get a chance to be a part of the new show, if he /she can prove to have the reality star quotient.