Appy Fizz and Saif Ali Khan hang out in a dream

The commercial has been created Creativeland Asia and went on air from March 17. It is supported heavily on digital platform 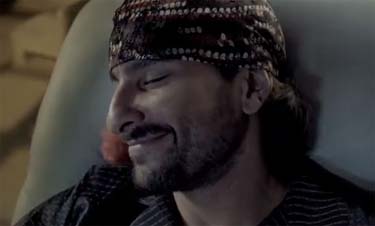 Appy Fizz and Saif Ali Khan hang out in a dream

The commercial has been created Creativeland Asia and went on air from March 17. It is supported heavily on digital platform

For this summer’s national marketing campaign of Appy Fizz, Creativeland Asia uses brand ambassador Saif Ali Khan’s dream as the new hangout spot for the cool drink. The TVC has just been released on the brand’s YouTube channel. The commercial went on air from March 17.

The TVC showcases Saif Ali Khan dancing to the tunes of the 90s hit song 'Main khiladi tu anari' with his best friend Appy Fizz and a bevy of beauties. Midway through the dream, when Saif realizes Appy Fizz is in his dream, he is miffed. Nonetheless, they continue to enjoy the limelight together, jumping around doing funky dance moves to the peppy Bollywood track.

The campaign opened early this week on social media platforms Twitter and Facebook. #SaifNFizzhangout trended constantly on Twitter both in India and worldwide. It has accomplished nearly 40,000 tweets. Appy Fizz followers on Twitter have made suggestions for new hangout spots for these two cool buddies using this hashtag. While #SaifNFizzhangout had created buzz on Twitter timelines of over 4.55 million users, it has added 200 per cent new followers, thus increasing the base of consumers for engagement in real-time for remainder of the year.

The witty persona of Appy Fizz is carried into its product design as well. This year, Creativeland has redesigned the packaging of the can variant of Appy Fizz to provide fresh content for its young consumers. The can highlights the witty and fun ‘can’ jokes in a graffiti-inspired font.

Speaking on the brand, Chauhan said, “Our unique approach towards the brand is what has resulted in us having a 99.9 per cent market share and has resulted in the brand showing triple-digit growth year on year. Our 2013 campaign is particularly exciting because our own Appy Fizz does a Bollywood number. And this has already shown us huge results in creating scale and cut-through, making the brand larger than ever before.”

Sajan RaJ Kurup, Founder and Creative Chairman, Creativeland Asia, who has also directed the film, said, “Appy Fizz films are always delightful to do. They are funny, crazy, and very Appy Fizz. I particularly enjoyed this one since this is the closest I have got to do a Bollywood item number. It was great fun working with Appy Fizz and Saif Ali Khan. They both behaved well on the sets!”

The film has been produced by ESTD (Easier Said Than Done) Films. The visual effects and the animations have been created by MFX in Kuala Lumpur.

On this continuing association, Saif Ali Khan said, “I’ve been hanging out with Appy Fizz for two years now and this is our fourth cool commercial. I can’t put in words how much I enjoyed shooting with my buddy. So I danced. OK, we danced. But really, working with Appy Fizz and Parle Agro has been awesome. The premise of this new TVC is the coolest by far. It’s like my dream come true! The music is something I’ve been a part of before. Reliving something like that after almost 19 years was really special.”

The campaign also marks the addition of new content on the brand’s microsite www.appyfizz.com. The new content involves a fresh website design including witty one-liners, a cool new interactive chat window where consumers can talk and put questions to Appy Fizz. ‘The Universe’s Most Ridiculously Awesome & Magnificent’ hangout guide, certified by Appy Fizz and Saif Ali Khan, provides recommendations for Appy Fizz fans to hang out in cool styles at parties, photos and sticky situations. There is also a dedicated section that shares notes on the art of mixology, using Appy Fizz as a mixer to create concoctions like Passion of Cider, Nutty Appy Fizz and Appy Fizz Julep.

There will be two new digital elements that include a blog ‘Fizzy logic’ and a ‘Fizz’ video channel. The ‘Fizzy logic’ blog will showcase fun interviews with eminent personalities, cover inspiring art under ‘Art of the Day’, and provide informative specs on cool hangout spots in and around Indian cities. The video channel will showcase the past adverts and new edgy videos.