342 years-equivalent of video streamed on Starsports.com in first month of launch; clocks unprecedented engagement levels for a sports website 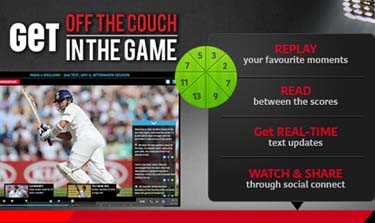 342 years-equivalent of video streamed on Starsports.com in first month of launch; clocks unprecedented engagement levels for a sports website

Barely a month old, Starsports.com – from the Star India stable – is transforming the way cricket is being consumed online, having recorded the highest time spent by users on any sports website per visit. Fans spent as much as 19 minutes per visit and viewed 342 years-equivalent of video in the first month of launch, unprecedented for a cricket website. The average time spent per visit in December, as per Comscore, despite the site being active for only five days that month, was 17.8 minutes and increased to 19 minutes in the first month. The 5.5 million unique viewers to the site across devices are enough to fill 83 `Eden Gardens' that, according to BCCI, has a capacity of 66,349. Starsports.com crossed 100,000 concurrent users consuming video during the third ODI between India and England. The cricket timeline allows users to pull out past matches, view top moments, play around with the scorecard, all the while enjoying unmatched video streaming. “With the cricket timeline, we’ve given viewers an experience beyond the ordinary,” said Sanjay Gupta, COO of STAR India. “Sports content in India has not seen much innovation across mediums. We want to change that and give fans the control to engage even more deeply with their favourite content. Through the world’s first cricket timeline, viewers can pick the exact moments they want to see, during or after the live match. In fact, we want to seamlessly integrate data and video throughout the site so that it’s an unmatched viewing experience.  We are excited about this leap and the response so far, and look forward to scaling it up further.” Every feature of the website aims to engage the consumer – from the video timeline to the reinvented commentary section that focuses on the action ball-by-ball, while pulling in real-time conversations on social media. The site boasts of the first-of-its-kind video scorecard bringing alive statistics with video clips, detailed analytics and graphics. All of these features, together with HD quality streaming, presents an unrivalled video experience. Star India has a leading presence in regional broadcasting as well through a bouquet of joint venture channels, i.e., Asianet channels and Star Vijay.