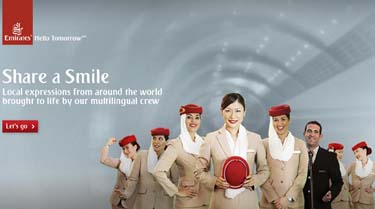 Emirates, one of the world’s fastest growing airlines, yesterday unveiled a new campaign showcasing the lighter side of language. Titled ‘Share a Smile’, the airline has created 29 videos in 14 languages featuring members of its cabin crew expressing quirky and unusual expressions and greetings from around the world.

The campaign was created by Emirates to help “globalistas” connect with each other through watching the videos and sharing them with their friends and family.

‘Share a Smile’ is the latest step in Emirates’ global brand campaign ‘Hello Tomorrow’ launched in April 2012 which aims to inspire people across the world to explore and connect with each other across cultures and borders.

Through the set of light-hearted 15-second animated videos designed to make people smile, Emirates’ multilingual crew explain the meaning behind popular local phrases like ‘Don't make an elephant out of a fly’ (Russian), ‘You're so pretty it made a bang’ (Cantonese) and ‘You're the cat's whiskers’ (English). There is also a compilation behind the scenes out-takes video showing the fun the crew had making the films.

“Emirates ‘Share a Smile’ has been created to showcase not only the breadth of linguistic skills amongst our international and multi-lingual crew, it is also intended to help build cultural understanding in a light-hearted way amongst travellers,"  said Sir Maurice Flanagan, Executive Vice-President, Emirates Airline and Group. “As we researched the phrases it became apparent that although many may sound unusual to non-native speakers when they first listen to them, when the translated meaning is given, the sentiments resonate internationally. ‘Share a Smile’ is meant to do just that, encourage ‘globalistas’ to learn about different cultures in an amusing way. The campaign is a celebration of how a kind word or phrase can connect friends and strangers alike across the world.”

The cabin crew who star in the videos were selected in recognition of their outstanding levels of service and native language ability. “Our cabin crew speak over 55 languages and on every flight we announce to our customers which ones are spoken on board that day. It is always an impressive list and something that is regularly commented on," said Terry Daly, Divisional Senior Vice-President Service Delivery, Emirates. “Showcasing many of these languages in the ‘Share a Smile’ campaign demonstrates that it is quite likely a member of cabin crew will speak the native language of our customers. This will help them feel even more welcome and helps us to deliver the highest level of customer service for which Emirates is renowned."

The 29 videos in the campaign have been filmed in 14 languages: Arabic, Cantonese, English, French, German, Greek, Italian, Japanese, Korean, Mandarin, Portuguese, Russian, Spanish and Turkish.  They can all be viewed and shared online by visiting www.emiratesshareasmile.com or Emirates’ YouTube channel, www.youtube.com/Emirates.