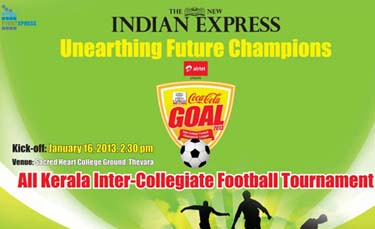 Goal 2013, the 2nd edition of the All Kerala Inter-Collegiate Football Tournament conducted by The New Indian Express (TNIE), kicks off in Kochi on January 16. The tournament is part of the TNIE group’s efforts to consolidate its brand goodwill through corporate social responsibility.

The tournament, to be held from January 16 to February 2, 2013, will be inaugurated by Ajay Maken, Union Minister for Housing and Urban Poverty Alleviation, and will feature the 16 top colleges from Kerala’s four universities. Chief Minister Oomen Chandy will give away the awards to the winners of the tournament.

Two matches will be played daily and the end of the fortnight will see the coronation of Kerala’s new college football champions.

Prabhu Chawla, Editorial Director of TNIE, said, “The tournament is part of our group’s Corporate Social Responsibility with the twin objectives of taking Kerala football back to its glory days as well as consolidating the brand goodwill that TNIE has enjoyed in Kerala for the last several decades.”

In fact, it was at the award ceremonies at Goal 2012 that Chief Minister Chandy had promised to grant land outside Kochi to start a football academy in the state, a longstanding demand of Kerala’s football lovers.

While cricket remains the national obsession, Keralites have traditionally been crazy about ‘the beautiful game’. The state has won the Santosh Trophy National Football Championship five times and been runner-up seven times. Over the years, it has produced some of the finest players to don the national colours. Till the 1990s, a clutch of state players formed the engine of the national team. In 1997, Kerala gave India its first professional football team, FC Kochi.

Sadly, football in Kerala has been on the downhill slide since then and the last time Kerala won the nationals was more than eight years ago. Worse, there is not a single Keralaite in the current national team. “TNIE recognises that there is abundant talent in the state and our endeavour and that of our sponsors is to tap the talent in the college campuses and nurture it,” added Chawla.