Thums Up campaign says ‘Be Dabangg, Be Toofani’ with Salman Khan

Conceptualised by Leo Burnett, the campaign builds upon Thums Up’s core idea of ‘Will Do Anything for My Thunder’ 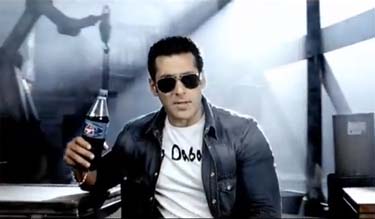 Thums Up campaign says ‘Be Dabangg, Be Toofani’ with Salman Khan

If you have the attitude, the passion, the fire and zeal to live life on your own terms and do something Toofani, then brace yourself –.Thums Up has launched the ‘Being Dabangg’ initiative. To create awareness about the initiative, the company has launched a television commercial. The property will give Thums Up fans across the country an opportunity to meet megastar Salman Khan.

The unique communication has conceptualised by Sainath Saraban, Executive Creative Director, Leo Burnett, and directed by Sameer Puri, Wacky Films. The Toofani communication builds upon Thums Up’s core idea of ‘Will Do Anything for My Thunder’.

Announcing the initiative, Anupama Ahluwalia, VP - Marketing, Coca-Cola India & SWA, said, “This latest initiative is a perfect unification of brand Thums Up’s Toofani attitude and Salman Khan’s Dabangg personality. This exciting initiative will serve as a seamless binder between the real stars of the country and their inspiration, Salman Khan. We are confident that this initiative will strike the right chord with consumers, encouraging them to do something Toofani everyday.”

The national initiative is being launched across India except in the states of Tamil Nadu and Kerala till February 13 and will leverage the popularity of digital media such as mobile phones internet amongst consumers across the country.

To participate in the initiative, consumers have to SMS Thums Up

Commenting on the commercial, KV Shridhar ‘Pops’, National Creative Director, Leo Burnett, said, “Thums Up as a brand is about being macho and all about being in action. The personality of the brand resonated with the ‘Being Dabangg’ initiative beautifully and hence we planned this association. Whether it was Akshay Kumar or South Indian actor Mahesh Babu in the past, the ambassadors have always portrayed the same brand message. The campaign is being promoted across all mediums equally. Coca-Cola has always used mobile advertising in a big way and is being promoted on that medium too.”

Thums Up brand ambassador Salman Khan said, “I have always believed in living life on my own terms, and doing something Toofani; and these attributes are what strongly connect me with my favourite Thums Up. Through this exciting and engaging initiative, I look forward to meeting the real ‘Dabanggs’ across the country; and celebrating the spirit of adventure.”