The world’s biggest viewers' choice awards will be telecast on on January 20, 2013 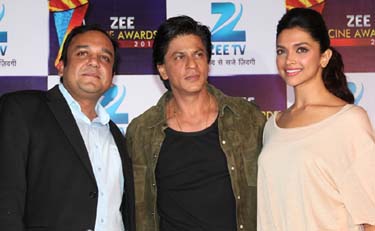 The world’s biggest viewers' choice awards will be telecast on on January 20, 2013

After creating a global footprint for the Indian film industry in places like Macau, Singapore, London, Mauritius and Dubai, Zee Cine Awards is returning home to where it belongs...Mumbai. This October 2, Zee Entertainment Enterprises Ltd has completed a milestone of twenty years. And with Indian cinema also on the threshold of completing 100 glorious years of entertaining audiences worldwide, the stage is now set for the World’s Biggest Viewers’ Choice Awards – ‘New Fair & Lovely Zee Cine Awards 2013’!

The event will be held at Mumbai’s, Yash Raj Studios on 6th January 2013 and it will be telecast on Zee TV on 20th January.  So get ready for the biggest and the most promising Bollywood awards night with the biggest stars, the brightest luminaries, the most talented personalities and some scintillating performances and rib tickling gags. Haq Hai aapka…so don’t lose the opportunity to vote for your favorite stars on Zee Connect and watch them win. Get ready for ‘New Fair & Lovely Zee Cine Awards 2013’, coming to your TV screens on January 20, 2013.  The Red Carpet will be shown at 7:30 PM followed by the main event at 8:00 PM IST.

Punit Goenka, Managing Director & CEO, ZEEL and superstar Shah Rukh Khan announced ‘Zee Cine Awards 2013’ at a press conference in Panchgani. Said Goenka, “I’m pleased to announce that the 13th Zee Cine Awards will be held in Mumbai in January. The Awards will be telecast on 20 January 2013 on Zee TV and for the first time will also be simulcast on Zee Cinema, Zing, Zee Marathi, Zee Bangla, Zee Tamil and Zee Telegu. To ensure the authenticity of the voting mechanism for the nominations listed for Zee Cine Awards 2013, we have made the voting system toll free and brought on board Ernst & Young to audit the entire process of voting.”

Keeping the viewer as the primary focus, Zee Cine Awards is propagating the rights of the viewers to choose their favourite actor/film with the positioning ‘Haq Hai Aapka’. This year, Zee will introduce the most innovative and transparent voting mechanism to make the ‘Viewers’ Choice’ proposition of ‘Zee Cine Awards 2013’ credible and completely transparent. To ensure this, Zee has empanelled the global leader in assurance, tax, transaction and advisory services, Ernst &Young, as a third party to authenticate the voting mechanism. Hence, the viewer will know for a fact that it is solely his/her vote that lies behind the success of every award winner at ‘ZCA 2013’.

To give the viewer a platform to voice his opinion, Zee has introduced an interactive platform which is a voice portal called ‘Zee Connect’. Viewers will be able to connect with Zee Cine Awards Voting via a toll free number 1800-1206644 to encourage more participation and bring transparency to this method. The final list of nominations will also be on www.zeecineawards.com from 28 December 2012 to 5 January 2013.