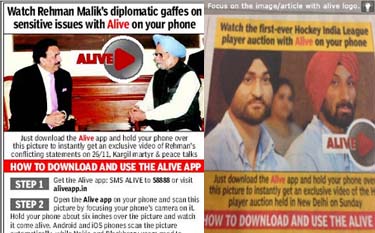 The Times of India Group, the largest media company in India, has soft-launched its Augmented Reality (AR) experience application, Alive. On the launch day of December 16, 2012, the app was downloaded 250,000 times, leading to 300,000 augmentation views on a single day! This significantly surpassed the internal estimate of about 15,000 downloads on day one.

AR is a technology that bridges the online and offline worlds using mobile phones. It allows readers of the newspaper to interact with a print medium, and get access to rich media content, such as videos, photos and polls. The Times of India's Alive App is the first augmented reality service launched in India by a media company.

On December 16, the most popular augmentation was a video interview between Arnab Goswami and Salman Khan, where the superstar sheds light on his darkest days when diagnosed with a disease. This story was augmented by 65,000 users over a four-hour period.

Times Internet CEO Satyan Gajwani said, "We love bringing new technology solutions that add value to our users. Alive is exciting because it is a new dimension to a medium people are used to and comfortable with. We've thought hard about where AR actually adds value and where it's just a gimmick, and we're working to ensure that each augmentation brings something new to our readers."

Bennett, Coleman & Co. Ltd (BCCL) Managing Director Vineet Jain said, “The Times of India believes in innovating constantly with out of the box thinking. This technology has existed for years as QR code readers, but no newspaper in the world has used it editorially to delight its readers. We are excited to bring a new level of interactivity to the newspaper every day, and there is more to come in the coming weeks. The Times of India and Alive is just a small peak into how the future newspaper will look in the era of convergence."

You can download the app at http://aliveapp.in , available on iPhone, Android, Blackberry and Nokia handsets.