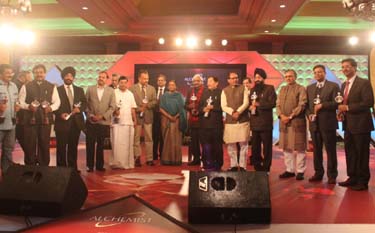 IBN7 announced the winners of the fourth edition of the prestigious Diamond States Awards - a unique, path-breaking editorial initiative, in association with the Alchemist Group, which lauds the major strides taken by Indian states in the areas of social and human development. Maharashtra and Sikkim bagged the top honours as India’s ‘Best Big State’ and India’s ‘Best Small State’, respectively.

Lok Sabha Speaker Meira Kumar was the Chief Guest at the glittering awards ceremony held in New Delhi on December 22, 2012, which was attended by Cabinet Ministers, Chief Ministers, prominent politicians, bureaucrats and other eminent personalities.

The IBN7 Diamond States Awards follows a credible and multi-pronged selection process that involves secondary data from authentic sources and primary data from a nationwide research exercise conducted by IPSOS, the Research Partner for this initiative. KPMG, the independent Knowledge Partner, manages the process, methodology and the data for arriving at the best states across various categories of the awards.

Speaking on the occasion, Rajdeep Sardesai, Editor-in-Chief, CNN-IBN, IBN7 & IBN-Lokmat, said, “IBN7 Diamond States Awards is an initiative which tries to highlight the remarkable contribution put in by the states to attain the set goals, which eventually leads to a better India.”

Ashutosh, Managing Editor, IBN7, said, “We are privileged to host the 4th edition of IBN7 Diamond States Awards. This award is an initiative to recognise the outstanding leap made by the states towards our nation’s growth.”