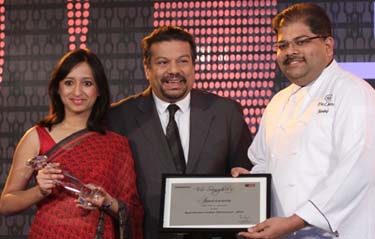 The team from Amaranta receiving the Best Modern Indian Restaurant 2012

Hindustan Times held the country’s biggest food extravaganza - the 4th Annual HT City Crystals People's Choice Awards for excellence in food and beverage on December 12, 2012 in a glamorous ceremony at the ITC Maurya. The best restaurants and night out places in the Capital under ten categories were felicitated at the event attended by more than 500 people, including the city’s crème de la crème.  All nominees under these categories were reviewed in HT CITY, and foodies voted for their favorite restaurant through SMS and online.

The second sets were the Critic’s Choice awards given out by Vir Sanghvi, noted food critic, and HT’s Media Advisor. This year, he selected winners across 19 categories. Sonal Kalra, Editor-HT City, while talking about the Crystals, said, “Every year we give the foodies of this city a chance to don the food critic’s hat  and celebrate culinary excellence with the country’s most exciting food awards -The HT City Crystals. The awards night is one evening Delhi looks forward to every year, and this year too, a scrumptious evening was enjoyed by the who’s who of Delhi and the food industry. This annual event has become the last word when it comes to eating out in the city. ”

The star studded evening saw performances by Rabbi Shergill, the kids from the Bivash Dance Academy who won India’s Got Talent, and stand-up comedians from Mumbai apart from a special surprise flash mob put together by the Harry Chutney dance group, wherein celebrities from the audience got up and danced to the ever popular – Gangnam style.

Speaking about the HT City Crystals 2012, Mr. Shantanu Bhanja, Business Head and Vice President -Marketing, HT Media, explained, “HT City Crystals is one of the most popular events in Delhi’s social calendar every year. Apart from being the most prestigious food awards in the city, Crystals is unique in that it involves the entire city in its endeavor to reward the best restaurants and restaurateurs of Delhi. ”

The HT City Crystals people’s choice awards, 2012, were awarded to –