YouTube partners with Anurag Kashyap and leading filmmakers to produce 5 showcase films for the contest. Filmmakers, students and video enthusiasts can submit their five-minute films by February 9, 2013 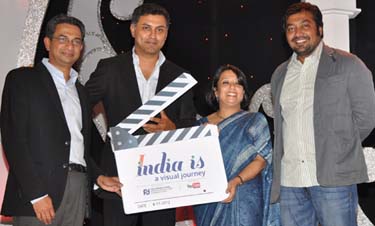 YouTube partners with Anurag Kashyap and leading filmmakers to produce 5 showcase films for the contest. Filmmakers, students and video enthusiasts can submit their five-minute films by February 9, 2013

The Public Diplomacy Division of the Ministry of External Affairs (MEA) and YouTube have announced the launch of a unique initiative, inviting people all over the world to participate in a short film contest titled ‘India Is...a visual journey’, celebrating India and her diversity. The contest will be open to users across the globe for a period of three months, with the last day of submission being February 9, 2013. All the entries will be featured on the www.youtube.com/indiais channel.

As part of the initiative, YouTube has partnered with renowned film director and script writer Anurag Kashyap and his directors to produce five short showcase films under the three themes of the contest – ‘India is incredible,’ ‘India is unforgettable,’ and ‘India is wherever you are.’ These five films will be produced in association with Viacom 18 Motion Pictures and Anurag Kashyap Films.

The showcase films will be used to inspire filmmakers, students and video enthusiasts to create their own five-minute films on any of the three themes. The contest will be open to users from all over the world for a period of three months, with the last day of submission being February 9, 2013.

The entries will be judged by a panel of judges from the film industry and will be rated on storytelling, creativity, originality, screenplay, performances and technical execution. The jury will select a total of ten winners with three winners in each category and the first place winners will get EOS Canon Mark II Camera + Lens, along with weekend getaway across exotic locations in India courtesy Taj Holidays. There will also be a special prize for the most voted and watched film. MEA and YouTube will announce and celebrate the winners at a jointly-hosted gala event.

Nikesh Arora, SVP and Chief Business Officer, Google, said, “We’re really happy to partner with India’s Ministry of External Affairs to launch this exciting initiative to showcase and celebrate India’s diversity on a global stage. YouTube is a powerful tool to express and share different opinions that can bring about a positive change in the society and as an organization we’re committed to supporting all such initiatives. ”

Said Riva Ganguly Das, Joint Secretary and Head of Public Diplomacy Division of MEA, who was present at the launch, “India Is was the first web based campaign initiated by the Public Diplomacy Division of MEA to connect and interact with people from all over the world and make them think about India. In the first year alone, we received more than 250 video entries on India from 42 countries and through this initiative we aim to create a visual roadmap of India for Indians and foreigners alike with global players like Google, Taj and Condé Nast Traveller and Incredible India as partners. We look forward to growing this initiative and connecting with a larger audience all over the world."

Anurag Kashyap said, “Short films are a challenging format and it will be very interesting to see the creativity and talent of filmmakers working on these themes. My team and I have already thought of some ideas and I look forward to the users’ response to the content we produce.”

India is at the heart of the action for YouTube in Asia, and this is an endeavour to demonstrate YouTube’s commitment to India and its culture. Hosting a short film contest built around the theme of India on YouTube is a great example of how the video platform can be used to engage with users worldwide and build the Brand India further on a global stage.

The ‘India is’ campaign kickstarted in September 2011 as a global video challenge. The property was developed by a Mumbai-based creative agency, Skarma. With this campaign, MEA is looking to facilitate a better understanding of India’s influence abroad and the perception others share about India. In its first year, the initiative received over 245 entries from 40 countries. The winners comprised four Indian participants and three international participants from Italy, Slovakia and the UK.