Started in April this year, the ‘You Read, They Learn’ initiative has helped 6,000 children attend school 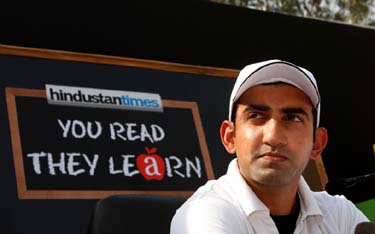 Started in April this year, the ‘You Read, They Learn’ initiative has helped 6,000 children attend school

Gautam Gambhir at Hindustan Times' 'You Read They Learn' programe at Pratham centre on Nov 29 2012. (Photo by Arijit Sen / HT)

Hindustan Times, one of India’s leading English dailies, has revealed Gautam Gambhir - accomplished Indian cricketer and Captain of the Kolkata Knight Riders, the current champions of IPL - as a face of the ‘You Read, They Learn’ (YRTL) initiative. YRTL is an ongoing  initiative to help educate underprivileged children.  Through the initiative, Hindustan Times readers contribute a part of the cover price from every Metro copy sold in Delhi-NCR towards creating a corpus which funds the education of over 10,000 children over the course of the year.

In the seven months since the launch of YRTL, the program has supported the education of more than 6000 students.  Gautam Gambhir has come on board as a face of the ‘You Read, They Learn’ initiative and will be involved in generating awareness for the cause of pre-primary and primary education.  The appeal of Gautam Gambhir will be instrumental in taking the message for the initiative to a wider audience, and making them come forward and participate in their own way to change the state of education of underprivileged children.

To this end, Hindustan Times also announced the launch of the HT Foundation for Change, a Trust Fund which will support the YRTL initiative, and into which the public at large, as well as corporations and other organizations, can contribute to drive the cause.

The event revealing Gautam Gambhir as a face of YRTL took place at an MCD school in one of the poorer neighborhoods of Delhi, where the children who have had the opportunity to go to school thanks to the YRTL initiative were given a chance to interact and play cricket with their idol.

At the event, Shantanu Bhanja, Vice President - Marketing, HT Media Ltd. said, “as a newspaper, we are intrinsically linked to the cause of education. With the ‘You Read, They Learn’ initiative, we wish to contribute strongly in the space of pre-primary and primary education as we believe that education is every child’s right.  It has been seven months since we started and we’ve managed to send about 6000 children to school.  We are delighted that Gautam Gambir has agreed to be a Face of the initiative, and to actively participate and support the cause”

Gautam Gambhir said, "I strongly believe that every child deserves to be in school and deserves to be educated.  Not only is going to school about education, it is about building discipline, being in a routine; it is the foundation on which we build our lives. In fact, I realized I could be a cricketer while I was playing the sport in school.  Hindustan Times is doing a great service by undertaking this initiative and of course, we must encourage this at an organizational level but also start making efforts on a personal level.”