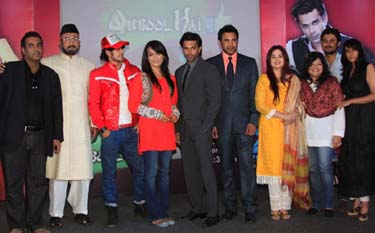 With a view to break all stereotypes about the community, Zee TV will launch its first Muslim social drama, ‘Qubool Hai’. It is a mixture of drama and romance. The show explores the lives of three individuals, Zoya, Ayan and Asad who are starkly different from each other and yet their lives are beautifully entwined by the threads of destiny. Premiering on 29th October at 9 30 pm, the show will attempt to remove certain misconceptions that people have about Muslim culture.

The three lead characters in ‘Qubool Hai’ are Zoya, Ayan and Asad. Zoya is a modern, vibrant, new- age girl who questions stereotypes. She is a girl who listens to all but at the end of the day does what her heart says.  She knows and respects her culture but does not blindly follow rituals.  Ayan, is a happy-go-lucky boy without a care in the world. He falls for every pretty face that passes by but commits to none.  And the perfectionist, Asad who has renounced love from his life, only wants to become successful.

Viewers are also eagerly awaiting the launch of Qubool Hai as it marks the return of the small screen’s most wanted heartthrob, the lady killer, Karan Singh Grover in a lead role as Asad. The show also introduces two newcomers, the vivacious Surbhi Jyoti as the female protagonist, Zoya and Rishabh Sinha, in the parallel lead as Ayan. Surbhi is not new to the entertainment industry despite Qubool Hai being her debut on Hindi television. A spunky Punjabi kudi from Jalandhar, she is a very popular face in Punjab.  With a background in theatre, Surbhi has also played the lead roles in a superhit Punjabi movie, ‘Raula Pai Gaya’ and a soap, ‘Kathdiyan Wange’ on ETC Punjabi. Rishabhmakes his debut in acting after his initial brush with being in the limelight on MTV Splitsvilla earlier this year.

Said Sukesh Motwani, Fiction Head of Zee TV, “Set in a Muslim milieu; ‘Qubool Hai’ is a family saga that will cut across generations. It is a story of a culture which is so rich and yet misunderstood the most. Muslims from all over the world have a long history of making significant contributions to the society. They are diverse in nature, enriched with a rich literature, music and language heritage that has a profound impression on all of us. ‘Qubool Hai’ is a happy, cheerful and lively show that reveals the fine distinction between modernity and traditionalism. The show is going to be very atypical of the archaic and old school thinking. The manner in which Zoya embraces the codes of her culture and yet does not get tied down by the extremities that the society imposes will surely make her unique and very relatable to the audiences. To ensure that we use Pavitra Rishta’s leadership position, we have placed Qubool Hai at a 9.30 pm slot and created an alternate slot for Phir Subah Hogi at 11pm.”

Producer Gul Khan of Four Lions Production said, “Qubool Hai is about a journey of life, its trials and tribulations and acceptance of one’s fate. It is said that God gives us the strength to change what we can and the courage to accept what we can’t…some have the courage and some don’t have it in them to accept the change… But eventually the journey to accept what God has given us is the essence of Qubool Hai.I feel privileged to work with Zee on this show as they are truly an exemplary broadcaster that embraces all of India’s diversity in its stories to showcase a modern dynamic society.” Qubool Hai is co-produced by Divine Multimedia.

“This show is a life-changing experience for me as I aim to make Zoya an epitome for young Muslim women who do not see them being represented positively on the small screen. Despite the control and authority that has been imposed by some narrow minded elements of Islam, I will showcase a more universal approach where women and minorities are regarded as equal and Zoya represents it!”She adds.

The marketing campaign around Qubool Hai will launch around Eid and will aim at changing the perception of Muslim women in contemporary times through the eyes of Zoya. The 360 degree campaign communication has been designed in a way that shall not only tap Muslim viewers especially in key markets like UP/ MP but shall also open a new window to understand their culture and societal pressures in a very refreshing and inspiring manner. Besides the aggressive digital campaign, the channel has developed a focused IVR platform for the viewers to have a personal dialogue with Zoya who shall help them solve their problems in her inimitable style. The focus of the campaign has also been to highlight Zoya’s modern sense of fashion and style.