The campaign created by Grey uses humour in the storyline to drive home the product USP. And Anushka pulls it through effectively even without Ranvijay 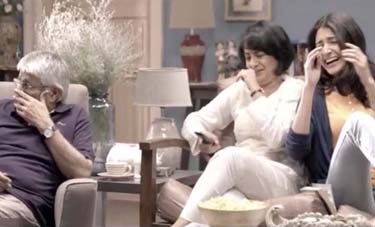 The campaign created by Grey uses humour in the storyline to drive home the product USP. And Anushka pulls it through effectively even without Ranvijay

Reliance Communications has come out with a TVC on its ‘All Share PostPaid Plan’, the first of its kind offering in the country providing a compelling new experience to subscribers using multiple smart communication devices with the exclusive facility to share voice, data and text on a single bill. The campaign, conceptualised by Grey, uses humour in the storyline to drive home the product USP effectively.

Anushka, who has made the Reliance Telecom campaigns memorable because of her one-upmanship over Ranvijay, also stars in this campaign. The TVC shows Anushka’s teenage brother, a vulnerable-looking boy, storm into the room where she is watching TV with their parents (played by Jayant Kriplani and Kitu Gidwani) with a Reliance phone bill in hand, looking a little miffed. He puts the bill down on the table and demands an explanation on why his name does not feature in the bill for a plan that is supposed to be shared by a family.

Anushka sees this as an opportunity to play a prank on her unsuspecting brother. She tells him with a very straight face that it’s because he’s not a part of the family! She says: “Tu Maa ko mandir ki sidhiyon pe mila tha.” The boy stands there looking devastated. It’s only when Anushka and their parents burst into laughter that the boy knows it was a joke. When he begins to leave the room in disgust, Anushka smothers him with sorries and lovingly pulls him on the couch saying: “Tujhe bhi adopt kar lenge plan main.”

The boy drops his grudge and finally looks happy to know that he’s in the family and will soon be on a plan that allows sharing of talk, text and data with the family – which, the commercial reiterates, is simply better.

Sanjay Behl, Group Head - Brand & Marketing, Reliance Communications, said, “In line with our continuous efforts to offer value proposition to our customers, ‘All Share Postpaid Plan’ is the first of its kind offering in the country to provide a compelling new experience to subscribers using multiple smart communication devices with the exclusive facility to share voice, data and text on a single bill giving them affordability along with great convenience. We are confident that our customers will enjoy sharing of talk-time, data and text among their members on this plan that will help them save on their bill every month through our innovation of ‘One Bill’ concept for the entire family or group.”

Malvika Mehra, National Creative Director, Grey India, explained, “The ‘All Share PostPaid Plan’ is a fantastic unparalleled offering from Reliance. So far the audience has been enjoying the chemistry between the characters played by Anushka and Ranvijay. This is the first time we are introducing Anushka's family, so there is a new energy in this film. The chemistry between all the characters on the set was so natural and effortless, one would think they are actually related! There is also an interesting take on the music. We purposely did a 'filmi' and dramatic track in sync with the joke they all are playing on the brother. All in all, we think the film showcases the plan in an entertaining manner.”

Vishnu Srivatsav, Executive Creative Director, Grey, added, “This was a great product and it gave us a chance to portray Anushka in a completely different context. Yet we wanted to keep Anushka in the same mischievous, slightly wicked zone, so I suppose the brother had to bear the brunt of her prank. And we were also fortunate that we had stalwarts like Kitu Gidwani and Jayanth Kriplani to play her parents. It was great to catch the tremendous energy and chemistry on the set. This is the first film in this series and we're sure, as the family set piece, develops it will be very popular.”