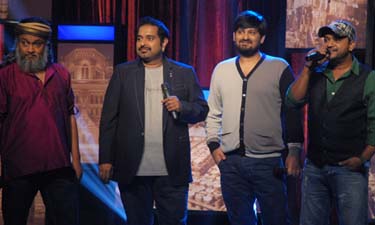 Engagement is clearly the mantra on Zee TV’s new season of ‘Sa Re Ga Ma Pa 2012’! Previous editions of the show over the last 17 years have viewers swear that it is India’s only credible music reality show that presents superlative young talent who have gone on to make a mark in the music industry. It returns after two years to not only entertain you with extraordinary music but also enhance your mind through an ingenious viewer experience. Based on the viewer insight that ‘India knows it’s music’ and the fact that everyone is an expert in music in their own way, the new experience of ‘Sa Re Ga Ma Pa 2012’ will be far more enriching and entertaining. This season, it’s going to be about more involvement, more technology and more knowledge dissemination.  The show will also have many interactive elements like innovative mobile and online applications that will draw the viewer to the show with riveting music-related content. Packed with some unbelievable voices, a panel of renowned judges and an assembly of skilled musicians, ‘Sa Re Ga Ma Pa 2012’ will premiere on Zee TV on  29th September at 9 PM and will be aired every Saturday and Sunday.

Right from the auditions phase held in 13 cities in India over the last three months where over 1 lakh passionate aspirants have showcased their talent, the viewers have been given the opportunity to evaluate their performance with the use of voting meters. They played a major role in selecting contestants through online auditions as well where a contestant’s entry depended on the number of ‘likes’ or ‘hits’ their uploaded video generated. The upcoming edition will see the mentors and the contestants as friends unlike the traditional distanced Guru- Shishya equation. The stage set-up will be like that of a concert with the musicians on the stage playing live as the contestants sing. To test the contestants music quotient and increase the level of competition, many elements will be introduced including changing the code or sur of the song or throwing a request for a jugalbandi. A unique musical quiz contest will come on screens before every break and the answer will be given just before opening of next segment.

The renowned mentors are an eclectic panel of music connoisseurs who have given India some unforgettable melodies and are idolized by millions across the world. Their music speaks volumes about their persona and their passion towards their art. The judges are music director duo, Sajid & Wajid, bassist- lead vocalist of the band Indian Ocean, Rahul Ram and music composer and singer, Shankar Mahadevan.

At the launch announcement, ZEEL – Content Head (Hindi GECs), Ajay Bhalwankar, said, “With ‘Sa Re Ga Ma Pa 2012’, our aim is to customize the viewing experience with increased levels of audience engagement.  Over the last 18 years that ‘Sa Re Ga Ma Pa’ has been telecast, viewers have grown to trust the brand to only bring forth superlative voices. In the current cluttered environment, viewers prefer watching content that not only entertains but involves them. So, we have taken the interactivity route by understanding their inherent interest in music. There is a special round in the show where we will change the style and the chords of a song and the contestants will have to improvise it to gauge their knowledge of music.”

To make the brand relevant to a larger audience, Zee TV’s marketing campaign for ‘Sa Re Ga Ma Pa 2012’ has many firsts in the Hindi general entertainment space in India. The channel has been consistently at the forefront of innovation in the digital medium since the launch of the Dance India Dance 3 app and WAP early this year.  Recognising the changing trends of how people are accessing information on various mediums, the channel has once again created some first-of-its-kind apps to keep the viewers clued into the show anywhere and everywhere. It’s digital campaign will seamlessly take the TV experience to the next level. One such unique innovation is the ‘Call & Sing App’ which is the first ever app made for an Indian reality show. It is a cutting-edge Mobile + Facebook app which will enable the viewer to sing on their mobile phones, post the audio clip on the ‘Sa Re Ga Ma Pa 2012’ Facebook page as well as their own Timeline even when they are ‘on-the-go’. This app successfully integrates the ‘Sa Re Ga Ma Pa’ TV and web experience, giving individuals the ability to customise and engage simply. The technology that makes it easy to record and publish videos should help the brand to grow their repositories of video-based user-generated content. The ‘Dial and Sing App’ is hosted on ‘Sa Re Ga Ma Pa 2012’ Facebook page at http://apps.facebook.com/ZeeTVSaReGaMaPa2012

Among other initiatives are the ‘Hot or Not’ app will have people singing one after another and the audiences can rate them. There will be ‘interactive banners’ with jumbled lyrics that test their knowledge in music. The ‘Sur Tab’ will have ‘Sa Re Ga Ma Pa Dha Ni Sa’ as syllables on a tab that can be arranged by a viewer to produce different music.  Once arranged, the sur can be heard and shared by the viewer immediately. There will be different instruments every week to keep the experience a refreshing one. The ‘Sa Re Ga Ma Pa Mobile App’ will have a media gallery of videos and photos, singing & music tutorials by mentors, anchor and contestants. Here, the viewers will get an opportunity to chat regularly with the mentors, anchors and contestants. There will also be a ‘Did You Know’ option with trivia related to music.  The digital strategy has been so planned that all apps available on mobile or online allows one to engage and interact and are not the routine information led creatives. All these will also available on the microsite, saregamapa.zeetv.com

Apart from an extensive digital plan, the channel will also be aggressive in other mediums like print, radio and TV. The Press Conference held on 21 September in Mumbai will have large screens that showcase live tweets sent to the mentors by the media attending the event and from viewers. It is the first time when journalists and audiences from all over the world can tweet their questions for the mentors. The mentors will respond to all tweets at the press conference. Three lucky winners who have participated in a contest on ‘Sa Re Ga Ma Pa 2012’ Twitter page will get an opportunity to meet the mentors. On 28th September, there will be a roadblock on ‘Youtube’ masthead along with a take-over on the ‘Yahoo’ site, through which the channel will aim to drive maximum traffic towards the premiere of the show. The premiere of ‘Sa Re Ga Ma Pa 2012’ is being promoted across the biggest DTH players of India - Dish TV, Airtel and Tata Sky. All Dish TV subscribers will directly tune into ‘Sa Re Ga Ma Pa 2012’ on Zee TV when they switch on their sets on 29th and 30th September from 9 to 9.30 pm to increase sampling. The on-air campaign is being played out across Zee Network and also across news, music, Bollywood entertainment, Hindi movie and kids’ entertainment channels. On radio too, the show aims to heighten interactivity through contests, RJ links and creating characters based on the mentors.

Akash Chawla, Marketing Head – National Channels, ZEEL said, "The focus in ‘Sa Re Ga Ma Pa 2012’ is to connect better with the audiences who are watching the show and create a stronger relationship with them. Our view is that multiple touch-points can enhance a viewer’s experience. The innovations in the digital medium have the wow factor! It’s been seen that rather than being a distraction, these interactive methods in the digital domain tend to be program ‘companions’, enhancing the viewer’s brand experience. Our attempt is to make all ‘other screens’ an ally of the television instead of being its competitor.”