Conceptualised by JWT, the film celebrates the relentless pursuit for perfection of a new generation that trains hard to make it to the country’s highest playing field 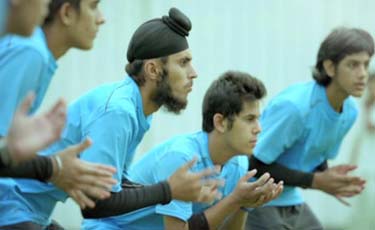 Conceptualised by JWT, the film celebrates the relentless pursuit for perfection of a new generation that trains hard to make it to the country’s highest playing field

Nike has launched the ‘Parallel Journeys’ TV campaign which celebrates the millions of young cricket athletes in India who relentlessly pursue perfection in the sport, no matter where they are or on what field they play. ‘Parallel Journeys’, featuring a roster of the sport’s best athletes, parallels the journey of hard work, training and dedication young cricketers take to achieve success, just as India’s elite athletes do. The ad is a part of Nike’s ‘Bleed Blue’ campaign, a multi-media initiative that brings to life the pursuit of greatness in the many parallel worlds of India’s cricket crazy bloodline that bleed blue!

The campaign debuted on social media on September 22, 2012, at 6 PM on the Nike Cricket Facebook page, and also hit television screens on September 23 during the ICC Twenty20 World Cup game between India and England on ESPN and Star Cricket.

As the action unfolds, viewers experience the journey of young cricketers who exhibit intense passion as they undergo demanding rituals of training and preparation to compete with the dream of one day donning the Team India jersey. Nike’s ‘Parallel Journeys’ exemplifies the inspiration, passion and pride that India’s cricketers carry on their sleeves to Bleed Blue for a billion hearts.

The TVC traverses the length and breadth of the country capturing the determination, passion and aspiration through the eyes of every young cricket aspirant while also depicting a similar journey that Team India’s elite athletes including Virat Kohli, Zaheer Khan, Ajinkya Rahane, R Ashwin, MS Dhoni, Yuvraj Singh take to uphold their dream to represent their country at the highest level of the sport.

Avinash Pant, Marketing Director, Nike India, said, “Nike’s ‘Parallel Journeys’ captures the journey to perfection in the sport clearly demonstrating the passion and hunger of a new breed that will stop at nothing. In the true spirit of ‘Just Do it’, a new generation of millions of young athletes can believe that one day they will be the voice of an entire nation.”

The television ad created by JWT Bangalore was directed by Abhinay Deo of RDP Films with creative direction by Senthil Kumar of JWT. Senthil Kumar, National Creative Director, JWT India said “Coming from Nike’s deep consumer insight, the brief provided was to celebrate the millions of young cricket athletes in India who relentlessly pursue perfection in the sport, no matter where they are or on what field they play. In the true spirit of ‘Just Do it’, the film inspires hundreds of cricket crazy youth by embodying the real journeys through their homes, buses, trains, boats,  gyms, colonies, schools, clubs and playgrounds where they train hard and travel long distances to reach their dreams.”

‘Parallel Journeys’ also features a dynamic soundtrack inspired by the sounds that surround the street game in India by simply using voices. This original Nike vocal percussion soundtrack’s music director is Dhruv Ganekar and the vocal percussionist is Taufiq Qureshi.