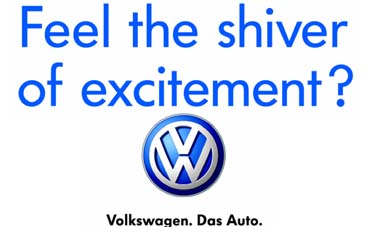 Innovative press advertising is not new to Volkswagen. From the ‘Talking Newspaper’ campaign in 2010 to the ‘Silver Newspaper’ in 2011, Volkswagen is credited with some of the most innovative marketing initiatives in India. On a Tuesday morning in 2010 (September 22), when the readers of The Times of India and The Hindu opened their newspaper, they were surprised to find their papers talking about Volkswagen cars. The German carmaker had spent close to Rs 5 crore for that much-talked about print innovation.

Volkswagen is learnt to have spent around Rs 7 crore to execute the campaign on this scale.

While the basic idea was conceived by its agency DDB Mudra, Volkswagen said that execution and implementation was a team effort. “Good ideas have always come from great teams and collaborative work within our marketing department as well as our agencies,” said Kothe.

Talking about the objective of the innovation, Lutz Kothe, Head of Marketing and PR, Volkswagen Passenger Cars, said, “The Polo and the Vento are our volume car lines here in India and are now packed with exciting new features like navigation system with rear view camera, Bluetooth, multi-function controls on steering wheel and much more at even more attractive prices – which is the reason for the excitement and therefore the essence of the innovation.”

And many adlanders too were not impressed. Here is a sampling:

IPL CEO Sundar Raman, former Managing Director of Mindshare, tweeted: “Shiver? Not something you wanna feel in a car! Innovation in execution, not the best copy.”

Equus Red Cell boss Swapan Seth: “The VW ad in today's paper was such a waste of money! And an exceedingly tired idea.”

Mindshare’s CEO, South & Southeast Asia, R Gowthaman: “Now it is innovation for the sake of it! What more can you do with paper?”

Subho Sengupta, “The VW ad with the little vibrating box is a telling comment on advertising. And I'm not telling.”

Perhaps the light-sensitive chip stuck to yesterday’s newspapers should have emitted a cold blast as one turned to the last page of the four-page ad, or the front page header should have read “Feel the tremors of excitement”. But VW and DDB Mudra can still be happy by the buzz created.