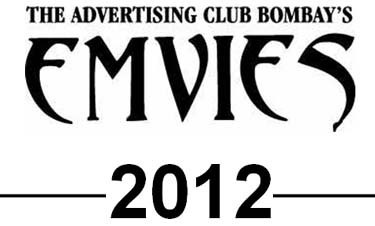 The excitement and celebrations were at a high with the announcement of Media Agency of the Year that went to Mindshare for the fifth time in a row at Emvies Awards 2012 held at Taj Lands End in Mumbai on September 3, 2012. With 4 Gold, 7 Silver and 6 Bronze awards, Mindshare topped with 160 points and had secured 27 nominations.

Mindshare was closely followed by Madison Media’s Pinnacle that won 6 Gold, 4 Silver and 1 Bronze adding 135 points. The agency had 15 shortlists.

Maxus remained the third most awarded agency with 3 Gold, 2 Silver and 1 Bronze (85 points). It had got 19 nominations this year.

In the fourth place was Madison World’s other agency, Madison Media Infinity, which won four awards from 5 shortlisted entries. The agency bagged 2 Gold, a Silver and 1 Bronze medals, giving it a total of 65 points including Grand Emvie.

Lodestar UM won 2 Gold and 6 Bronze medals from 13 nominations and remained at No. 5 with 60 points.

The tenth most awarded agency was DDB Mudra Max with 2 Silver and 2 Bronze awards adding up to 30 points. It had got 5 nominations.