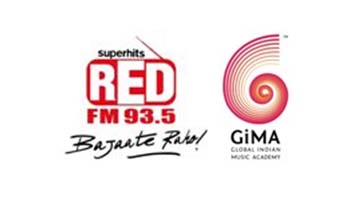 Commenting on the partnership, Nisha Narayanan, Senior VP - Projects & Programming, 93.5 Red FM said, “GiMA stands for excellence and honors the best talent in the music industry & Red FM is all about playing the most contemporary super hit music. There is an unparalleled synergy between the two and we are delighted to be partnering each other for three years in a row.”

RED FM known for innovative content, which makes the station the most youthful, contemporary and award winning radio station in the country. Red takes pride in it’s attitude, which is reflected in the tagline ‘Bajaate Raho!’ Red FM has always created content revolving around issues that concern the city and its citizens. However, this time RED has decided to present issues to listeners musically with the on-going ‘Gaa ke Bajaa’, here GiMA nominated stars sang Mumbaikar’s a unique song everyday for their daily woes on the Evening drive time show ‘Mumbai Local’, hosted by RJ Rishi Kapoor and will be aired from Monday to Saturday between 5 pm - 9 pm. Palash Sen lent his voice to support the problems faced by commuters relying on autorickshaws. Additionally, Papon sang about the lack of space for lovers in Mumbai,” she added

In addition to the above Red FM also gives a chance to their listeners to party with the crème de la crème of the music fraternity at the GiMA Nominations Party on 8th August, through a contest called ‘Ghanti Sun, Party Mein Ja’ and has garnered a huge response for the same.

“Today, GiMA has evolved into a major platform for the Indian Music Industry and brings together the entire fraternity, to honour and celebrate musical talent across various genres. This year, there is an interesting mix of nominees and I congratulate GiMA as they embark upon yet another musical journey. Radio is a great medium to reach out to the fans and I am sure it will be a grand celebration for 93.5 Red FM,” said Javed Akhtar, noted poet-lyricist and Advisory Board Member of GiMA.

Commenting on the association, Sabbas Joseph, Director, Wizcraft International Entertainment said, “We are glad to have Red FM as our radio partner once again, for the third edition of the GiMA. It has been a great association and we look forward to yet another spectacular celebration with them this year. Our partnership with Red FM will help listeners in India engage with GiMA in a unique manner. With its excellent listenership base in India, we are hopeful of providing the best in music and entertainment which will also reiterate our vision of bringing people together for the grandest celebration of Indian music.”

GiMA is the only Music Awards platform with a voting process based on peer-to-peer recognition. Nominees are selected by a Jury panel of over 30 eminent members from the music & film industry and later presented to the GiMA Academy for the final voting. The Academy’s votes are tabulated by KPMG, the process auditors for GiMA who determine the winners. To ensure a fair and unbiased evaluation, the Academy follows a thorough and meticulous voting process.

While the country’s best talent comprises of the jury, as per a mandate by KPMG, all jurors do not adjudicate on categories/genres in which they are in contention. The illustrious Advisory Board members include Dr. L. Subramaniam, Hariharan, Javed Akhtar, Mukesh Bhatt, Prasoon Joshi, Pt. Shiv Kumar Sharma Rakeysh Omprakash Mehra, Resul Pookutty, Shankar Mahadevan, Shubha Mudgal, Vishal Bhardwaj among others. The Academy comprises over 300 members from the music & film industry encompassing industry stalwarts, music directors, producers, lyricists, singers, technicians, composers and leaders in the music business.