A new television series based on real people, real investigations & real evidence to air every Saturday and Sunday, from June 30 at 10.30 pm 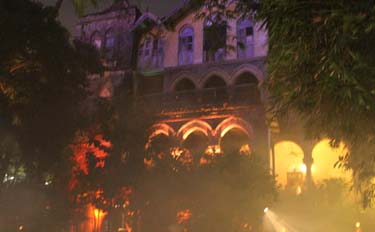 A new television series based on real people, real investigations & real evidence to air every Saturday and Sunday, from June 30 at 10.30 pm

Do you believe in the unexplained or inexplicable? Do you sometimes wonder what happens after death? Where do souls go, why sometimes we feel in a certain way and yet can't explain the feeling? Zee TV’s upcoming show, ‘Fear Files’ tries to uncover the truth behind some of the most compelling, and seemingly mystifying images that have occurred in different places in India. The show focuses on the realm of the supernatural, events that are experienced by those who have lived to tell their story. It is a journey of ordinary people who have had extraordinary experiences. Through the depiction of real occurrences that have happened in India, Zee TV seeks to enlighten viewers and elucidate that which has become hidden beneath the many layers of misunderstanding. Starting on June 30 at 10.30 pm, ‘Fear Files’ tells stories of people who showed faith and incredible strength in the face of extreme fear.

This gripping, filmic and high-octane drama-documentary series brings to life the real stories of people who have lived through paranormal experiences that defy explanation. ‘Fear Files’ also introduces paranormal experts who are incredibly gifted in their fields of expertise, and see what no one else can. The paranormal experts like renowned Dr. Mehra Shrikhande will share a rationalist view on all unnatural phenomena including poltergeist activity, strange creature sightings, and unknown energy anomalies…the elements visualized or imagined are several but the experience is the same..Fear!!!

With a series of the most fascinating real life cases, Zee TV will recreate real incidents in an investigative and matter of fact approach which will set the show apart from all shows currently on Indian television. ‘Fear Files’, a 26 episode series, will feature incidents which will empower you to: debunk myths; identify possible explanations for strange experiences; feel confident of your conclusions about each experience and know how to live with paranormal and non-paranormal experiences. What sets ‘Fear Files’ apart is the video diary format in which it will be presented wherein real victims who have survived the incidents talk about their experiences as the incident is recreated.

Sukesh Motwani, Fiction Programming Head, Zee TV says, “‘Fear Files’ is not just another horror or crime show. It delivers a surprising and downright chilling look into the world of the paranormal by those who have experienced the other side. Using a mixture of intimate first-hand testimony, and gritty realistic drama, ‘Fear Files’ will transport viewers into a world turned upside-down by extraordinary, terrifying and sometimes life-threatening paranormal events. This series has a less sensationalized approach and our aim was to involve, engage and entertain the viewer and underplay the ‘scary element’ so that it looks more believable for the television audiences.

“‘Fear Files’ features true and astonishing stories of the paranormal, told by some of the people who lived through them. They are actual story tellers and their emotions don’t lie. The purpose is to bring the fear these people felt to your TV screens. And where real people have been hesitant to come in front of the camera, we have cast actors who will re-enact each experience with same passion and emotion. We will also have a paranormal expert on the show whose role will be to decode the myth or give a plausible explanation to the viewers as to why ‘the unbelievable occurrence’ happened!”

Producers of the show, Abhimanyu Singh from Contiloe Productions and Majid Aazam from Dreamz Images, have spent almost a year on researching the incidents to be showcased on ‘Fear Files’. Using the highest production values, the show will be presented in a new video diary format with a very polished and professional look. It is being shot in as many real locations as possible like Mumbai, Delhi, Ghaziabad/ Noida, Bhangarh (Rajasthan), Himachal Pradesh, Mussoorie, Haryana, Goa and Kolkata. ‘Fear Files’ will explore paranormal programming with unprecedented evidence on subjects including all kinds of supernatural beings and elements like – Vaastu, Djinn, Haunting, Possession, Yeti, Tulpas, Bhairavi, Dybbuk, Poltergist, Reincarnation, Tantric sacrifices, Astral projections/out of body experiences, Sixth Sense, life after death, electronic voice phenomena, haunting, informative and awe-inspiring stories, alternative healing, cryptozoology, the spiritual and metaphysical, just to name a few.  Through the re-enactment of real life incidents, great interviews of people who experienced these, ‘Fear Files’ will bring you closer to some incredible events.