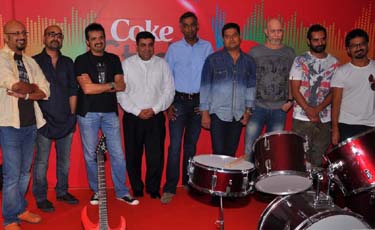 Coke Studio@MTV is all set for its second run as it continues to celebrate the spirit of Indian music in all its glory. The second season was announced in the Capital today, as Music, Energy, Happiness and Conversations set the perfect canvas for 7 music wizards; Amit Trivedi, Ehsaan-Loy, Karsh Kale, Hitesh Sonik, Clinton Cerejo, Shantanu Moitra and Nitin Sawhney to come together and discuss one of the Nation’s biggest passion……Music. The platform - Coke Studio@MTV which is back, in a bigger and better format!

Launched in India in 2011, by Coca-Cola India, in association with MTV, Coke Studio@MTV is a first of its kind music project in India which brings together diverse artists of different genres to create an extraordinary series of medley, giving music lovers across the country a unique opportunity to enjoy Coke Studio’s signature fusion music.

This year, Coke Studio@MTV will showcase a whole new lineup of artists. In this 2nd season, the focus will be to showcase diversity and innovation through 8 unique Episodes, 12 breakthrough Producers and over 200 incredible musicians.

Announcing the launch of the 2nd Season of Coke Studio@MTV, Wasim Basir, Director, Integrated Marketing Communication, Coca-Cola India, said, “Music has no boundaries and this is the core idea behind Coke Studio@MTV. Some of India’s most talented musicians have come together at a common platform, driven by a common cause, to celebrate the pure joy and happiness of music. Season II is built on the response and feedback to Season 1, and we are hoping that music lovers would relate to this coming together of different genres.”

He further added, “I would also like to take this opportunity to thank each of the music producers, under whose stewardship Coke Studio Season II has taken shape and aspires to reach the next level.

According to Aditya Swamy, EVP & Business Head, MTV India, “What better way to express our diversity than through the language of music...264 musicians, 40 songs on one single stage. Bringing together genres as varied as classical, rock, folk and EDM, Coke Studio@MTV is an expression of the music of India."

Coke Studio@MTV-Season II will see musicians from different genres come together and collaborate to create original music. Staying true to the core idea of being a Fusion Music Project, the property will see independent, classical, folk and popular artists combine their creative energies in a rare live performance. This year, there will be a different producer leading each episode of Coke Studio, with his entourage of artists and songs. Coke Studio@MTV Season-II will see both established and well known musicians and producers collaborate with emerging, local artistes for creating a music which is signature Coke Studio. The list of artists performing at Coke Studio this year includes names like Jalebee Cartel, La Pongal, SwanandKirkire, Master Saleem, Shankar Tucker, Shilpa Rao, Papon and many more.

Coke Studio @ MTV- season 2 is produced and broadcasted by Viacom 18 in association with Coca-Cola India Pvt. Ltd. and Red Chillies Entertainment's, Idiot Box. This year, Coke Studio kick started with a series of recordings at the famous state-of-the-art Reliance Media Works Studio in Mumbai. With 12 producers, over 264musicians and over 40 original songs, season 2 will give you a taste of varied musical flavors. For anyone who likes to discover new sounds and experience unexpected combinations, this season will be a special treat. So gear up to venture into the brand new season of Coke Studio@MTV with teasers, sneak peeks, pictures & much, much more made available exclusively for Coke Studio fans on www.facebook.com/cokestudioatmtv.