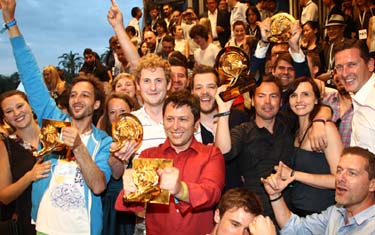 The Cannes Lions International Festival of Creativity has held the second of four awards ceremonies to honour a further four of its 15 entry categories: Creative Effectiveness, Media, Mobile and Outdoor Lions winners.

The Media Lions jury, led by Mainardo de Nardis, CEO of OMD Worldwide, voted and deliberated on a total 3,247 entries and selected 11 Gold, 28 Silver and 67 Bronze winners from a shortlist of 281. The Jury decided to award the Media Grand Prix to Manning Gottlieb OMD London for their Google entry, 'Google Voice Search'.

Duval Guillaume Modem Antwerp were presented with the prestigious Media Agency of the Year award during the ceremony. Second place went to Jung von Matt Hamburg and third to Manning Gottlieb OMD London.

Of the 4,843 entries in the Outdoor category, 588 made it to the shortlist with a total of 112 selected as winners of which 25 were Gold, 35 Silver and 50 Bronze. Two Grands Prix were awarded in the Outdoor category. In the Billboards & Street Furniture and Posters category, the Grand Prix was awarded to Ogilvy Shanghai for '#cokehands' for The Coca-Cola Company. The second Grand Prix, for Ambient, went to Jung von Matt Hamburg for 'The Invisible Drive' entry for Daimler. Sheung Lan Yo, Executive Creative Director, North East Asia; Chairman JWT presided over the Outdoor jury.

Also honoured at the Awards ceremony were the Gold winners of the Young Lions Media Competition which went to the team from the Czech Republic. Silver place went to the UK and Bronze to Portugal.

The winning work from these categories is now available to view online together with their credits at www.canneslions.com/work.

Yesterday, participants attended another busy and inspirational day of seminars and workshops which included presentations from The Coca-Cola Company on the new rules of marketing and consumer engagement; Starcom MediaVest Group & TED with their seminar titled 'Inspire me for the Future'; Facebook on the psychology and creativity of sharing; YouTube who discussed how online video powers create innovation and Ear Drum whose workshop was about the sound of radical thinking.

Ongoing events at the Festival include the Young Lions Competitions in Design, Cyber, Marketers and Film categories and Master Classes which offer relaxed sessions putting young creatives, suits and marketers in intimate contact with some of the biggest industry names including Sir John Hegarty, Tony Granger, Ted Royer and Jeff Goodby. Tuesday also saw the kick-start of the two-day Beach Soccer Tournament with 16 countries participating.