Lines-up a new movie, new episodes and contest this summer 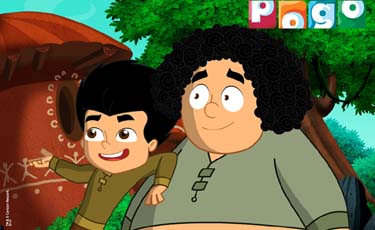 Lines-up a new movie, new episodes and contest this summer

Get ready for double the bang, double the adventure and a million times the laughter on POGO with twin superheroes ‘Kumbh Karan’! Returning this summer vacation is POGO’s first originally animated series Kumbh Karan, with an all new season, movie and contest.

Adding to the summer line-up of fresh content, POGO will be premiering a new feature on Kumbh Karan called ' Kumbh Karan v/s Danavpur' on May 27, 2012 at 12pm. This time, while blithely straying into Danavpur (the deadliest and the horrifying demon kingdom), Kumbh Karan glug down a vat of golden honey only to realise that it belonged to Danavpur’s evil King Yakshak. Now, to stop the evil king from waging war on Ajab-Gajabpur, Kumbh Karan propose a sports event in which if Ajab-Gajabpur win, the evil king will grant them pardon. But with deadly competitions and old rivals returning for revenge, will Kumbh Karan manage to win the sports event or will evil King Yakshak reign terror on Ajab-Gajabpur?

Following this exciting feature, will be the launch of Season 2 of Kumbh Karan. Together with their best friend Tara and pet porcupine Kaddu, Kumbh Karan travel across the world on a series of adventures, from rescuing trapped princesses to battling crazy creatures to travelling through time. This season also features 2 additional characters: ‘Mishri Mausi’ – the urban wannabe “cool” housewife who lives through her soap operas and her son, Pintu – the dimwitted wannabe “superhero”. These two persistently try to show up Kumbh Karan and earn the title of village saviors but to vain. They are the perfect antiheroes! New episodes of Kumbh Karan start June 3, 2012, every Sunday at 9am only on POGO!

That’s not all! Kids can also win exciting prizes like LED’s, PSP’s, DVD Players, etc. by participating in the on-air contest called ‘Pet Pooja Dhakka Mukki’ starting June 3, 2012. All they need to do is, tune-in to Kumbh Karan and SMS the correct answers to ‘KK

Monica Tata, General Manager, Entertainment Networks, South Asia, Turner International India Pvt. Ltd. said, “Owing to the phenomenal success of the last season, this year, we have brought back Kumbh Karan with even more adventurous plots and new characters who add humorous twists to the show. We are certain that kids will enjoy each new element of Kumbh Karan, right from the new movie, episodes and contest."