Judged by the who’s who of the advertising industry, the much-talked-about Longhand competition recently announced the 10 winners 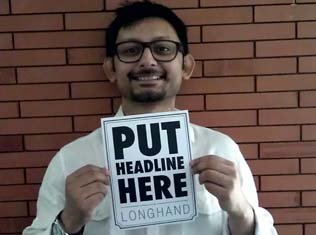 Judged by the who’s who of the advertising industry, the much-talked-about Longhand competition recently announced the 10 winners

Three hundred entries and 10 winners! Five briefs, one extended deadline, two months of writer’s delight, and judge’s dilemma! The interest in long copy ads never got better than this. Judged by the who’s who of the advertising industry, the much-talked-about Longhand competition recently concluded. And going by interest that initiative of 28-year-old Bodhisatwa Dasgupta, Creative Controller – Copy, Ogilvy & Mather, Gurgaon, got, the competition truly challenged the ‘notion’ that people do not read long copy ads. Probably, nobody gets the chance to write one.

To keep the writers’, in copy writers in the industry alive, Dasgupta has been running a community on Facebook called ‘Put Headline Here’. And taking on from there was Longhand competition.

Indra Sinha, who has the distinction of having been voted one of the top 10 British copywriters of all time; Neil French, former WPP Worldwide Creative Director and founder of World Press Awards; Swapan Seth of Equus Red Cell; Emmanuel Upputuru, former NCD of Publicis India; Satbir Singh of Euro RSCG; Ashish Chakravarty of McCann; and Nima DT Namchu of Contract Advertising, judged the Longhand entries.

“We both enjoyed judging the Longhand Awards, and once again congratulate Bodhisatwa for having the idea and making it happen. I'll be very interested to find out the names of the winning writers, as will some people with far more power than I to make a difference to their careers,” singed Indra Sinha and Neil French on 25 April 2012. [Read more here: http://putheadlinehere.blogspot.in/2012/04/neil-indras-judgement.html]

The winners have been listed on Ads of the World website and while the Gold winners get D&AD book, the rest of the winners get Neil French’s book ‘Sorry for the Lobster’ signed by the Worldwide Chief Creative Officer of O&M and Chairman of its Worldwide Creative Council, Tham Khai Meng.

The Gold winners include Ishrath Nawaz, Associate Creative Director, Saatchi & Saatchi; and two entries from Chintan Ruparel, copywriter at Taproot India. While the 32-year-old Nawaz believes that thanks to everything being visually-driven, one only gets to see long copy ads during awards, Ruparel offers another point-of-view, “I do not believe in the concept of long-copy ads. I believe in writing as much is needed. In fact, my entries to the competition were also short.”

“This doesn't go to say at all the rest of the entries were sub-standard. Quite the contrary in fact, barring a few, many were surprisingly good. This really tells us two things: that people read long copy, and that people still write it. To the enthusiastic entrants who didn't manage to win this time, I'd like to tell them to try again, and try yet again till they do. For the more a writer writes, the better he gets,” Dasgupta added.

How does it grow from here? The man behind the initiative said, “Well the first thing I'd do would be to build a site – it would streamline the entire process. This year, I was incredibly happy to receive quite a few entries from abroad; next year I plan to make it make it bigger to enable more participation.”