After creating a buzz with teasers for 15 days, the contest designed by Lowe Lintas Kolkata was extended through digital, outdoor and radio throughout the country 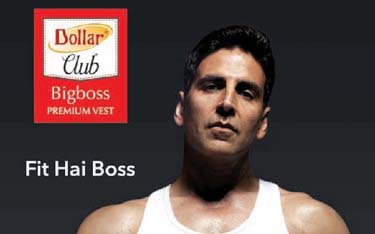 After creating a buzz with teasers for 15 days, the contest designed by Lowe Lintas Kolkata was extended through digital, outdoor and radio throughout the country

Akshay Kumar is back as an action hero this year with his new movie ‘Rowdy Rathore’. This coincides with his inimitable action style promotion of innerwear brand Dollar BigBoss in the latest summer campaign for the brand.

Dollar Industries has renewed its association with Akshay Kumar as brand ambassador for its ‘BigBoss’ premium innerwear brand for the coming three summer seasons starting 2012.

Every year with the start of summer, Dollar comes up with innovative ideas to market its innerwear products. This year, in a first of its kind campaign in the hosiery industry, created by Lowe Lintas Kolkata, Dollar launched the 'BigBoss Se Milo Contest’. The campaign started with a teaser and was revealed with Akshay’s new photo shoot for Dollar BigBoss range. The campaign was extended through digital, outdoor and radio throughout the country. A micro site was built to get pre-registrations for the contest. Post the launch, a Facebook page was created to guide people on how to participate in the contest.

With the campaign aimed at establishing BigBoss as a brand, the logo also underwent a change with the Dollar (within the logo) getting smaller.

Bidyut Nath, National Head for Advertising & Corporate Communication, Dollar Industries, said, “The campaign received remarkable response from every corner of the country. Approximately 31,000 participants have registered themselves for the contest. The registration procedure continued for a month and two lucky winners were announced to meet Akshay Kumar. For the second prize 500 participants were given Dollar Bigboss T-shirts, while another 1,000 participants received goodie bags.”

The success of Dollar Club BigBoss skyrocketed with the campaigns done by the actor in the past as the brand achieved a staggering 400 per cent growth in sales in 2011. Vinod Gupta, Managing Director of Dollar Industries, said, “We sincerely believe that our association with Akshay Kumar will set new records in the years to come.”

Dollar earmarks about 10-12 per cent of its revenue as ad spend. “Last year the turnover of the company was Rs 387 crore, and this year it is Rs 450 crore. Thus, keeping the earmarked percentage for ad spend, our advertising budget has increased.”

Dollar boasts of being one of the top four hosiery brands in India. The company has joined hands with the French and German retail giants Carrefour and Lulus, respectively, in the Gulf, and is currently the highest selling innerwear brand in the UAE and Middle East. In India, it has associations with Reliance Trends and Bharti Walmart.