Discovery brings new season of 'I Shouldn't Be Alive'

Premiering on June 4, the show will air every night at 9 pm 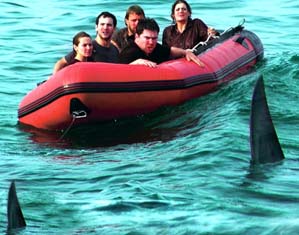 Discovery brings new season of ‘I Shouldn't Be Alive’

Premiering on June 4, the show will air every night at 9 pm

What would you do if you were suddenly faced with the possibility that you might die? Would you have the mental and physical strength to push on and fight for your survival? A new season of Discovery Channel’s survival series ‘I Shouldn't Be Alive’ brings incredible stories of ordinary people who were unwittingly thrown into dire situations but beat unimaginable odds to survive. Faced with moral dilemmas and forced to make desperate decisions, relive every moment of their physical and emotional journeys that test the resilience of the human spirit.

Each one-hour episode presents a true-life story of endurance, using accurate reconstructions and the first-hand testimony of those who managed to overcome extraordinary danger. ‘I Shouldn't Be Alive’ explores true stories of survival, focusing on the moral dilemmas, crucial moments, chance events and life-or-death decisions faced by these survivors. From battling a raging blizzard in the snowy wilderness of Kyrgyzstan and drifting in shark-infested waters in Costa Rica to surviving a savage grizzly attack in the mountains of Montana and facing wild animals in Africa, ‘I Shouldn't Be Alive’ reveals our most basic instincts as we react to these extreme situations. The series also shows how our bodies cope with injury in times of stress, detailing the amazing intricacies and profound depths of the human condition.

Commenting on the programme, Rahul Johri, senior vice president and general manager - South Asia, Discovery Networks Asia-Pacific said, “Discovery Channel viewers have been drawn towards its extraordinary survival series like Man Vs. Wild, Man Woman Wild and Dual Survival.  Continuing its promise to inspire and entertain the viewers, the new series I Shouldn’t Be Alive celebrates the deep human drive to survive in death-defying situations.”

The series begins with an account of two hikers in New Zealand who take a risky detour around an ice wall, eventually becoming stuck on a potentially unstable rock ledge for ten days.  Followthe story of Dewey who became disorientated during a trek through a 330,000 acre national park in Hawaii and faced a five day battle to survive. Later episodes include the stories of Jordan Nicurity who fell from a cliff and was lost for four days; and friends Gary and Dave who found themselves seriously injured and stuck in the middle of Alaskan bear country after a light aircraft trip went badly wrong.

The programme revealsamazing intricacies and profound depths of the human condition.  Each episode inspires the audience as it details a unique incident and the ultimate fight for life.Striking visuals and the latest computer generated image technology will enhance these stories of human perseverance and survival under astonishing circumstances.