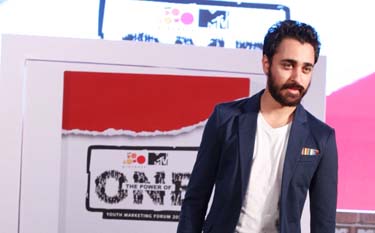 Interesting topics and insights were discussed at the MTV Youth Marketing Forum 2012. This year the ‘Power of One’ was discussed at the forum along with various trend experts and esteemed panel of speakers comprising Henri Holm – Sr. VP at Rovio Entertainment (creators of Angry Birds), Andrew Ridley – Co-Founder of WWF Earth Hour, Simon Smith - Digital Director at Interbrand Europe, Angela Barkan – Sr. Director of Marketing and Publicity at Sony Music Entertainment and renowned author Chetan Bhagat. The forum concluded with MTV launching the largest youth study on the millennial generation TATA DOCOMO presents ‘MTV Power of One - Youth Marketing Forum 2012’ at The Hangar, The Lalit, Intercontinental on the 27th April.

The forum sessions had Bollywood Star & Heartthrob Imran Khan in conversation with VJ Anusha on how films are pushing creative boundaries and how youth icons are constantly reinventing themselves. The other celebrities who were a part of the forum were MTV VJ & Actor Ayushman Khurrana, Sunburn co-founder Nikhil Chinappa and Bollywood director Bijoy Nambiar.

Aditya Swamy, EVP & Business Head – MTV India opened the forum by throwing some light on the astute study on today’s youth, undertaken by MTV titled ‘Power of ONE’. The study conducted in conversation with 5000 trendsetting young people across 31 cities in India was launched at the forum. The study reflects these young people’s perspective of life, technology, causes and values. The various topics discussed at the forum were power of social media, youth power in action, interactive workshop on case studies of brands across the globe on how they have co-created with youth and translated campaigns into movements, perspective on marketing and creating music for the younger audience, initiatives that has the potential to become a revolution. The day will also included prominent brand bosses from Tata Docomo, Nike India, Viacom18 Motion Pictures and more who discussed how brands need to engage in a dialogue with the audience in this world where one is the majority and the audience are the dictators.

Speaking on the conclusion of the forum Aditya Swamy, EVP & Business Head- MTV India said, “Dissecting and bisecting young people is an obsession at MTV. A herd of insight hunters armed with their non traditional techniques, capture the real and virtual behaviour of our trendsetters, jump right in to leverage the Power of One” Sumeet Pahwa, GM Marketing – TATA Docomo added, “Tata DOCOMO is has always associated itself with the youth and it has been a great experience for us to work with MTV on a study that tries to understand the youth. The study will help a lot of brands, marketers and others to understand the mind -set of the youth which will in turn be useful for them”.

The forum was anchored by MTV’s resident funny man Cyrus Broacha, who added oodles of spice to the food for thought. Adding to the dose of laughter was Sorabh Pant, who with a stand up act showcased the younger side of life.

MTV event was personification of the digitally savvy young generation. All participants were equipped with RFID enabled wrist bands; that instantly checks in to their respective Facebook, Twitter and Linkedin accounts as they step into the event premises. At the event, MTV also put up installations that are a personification of youth power. There were walls with themes like India against corruption campaign with a Anna topi and hammer installation, Slut walk wall with a life size mannequin signifying the Slut Walk campaign, a giant Earth Hour wall with a 3D switch, a Meter Jam installation, a huge MTV ACT wall showcasing the causes supported by MTV across water conservation, recycle, save trees them etc.  The event also had the ‘Youth Marketing Forum 2012’ research/book on display. The attendees could instantly broadcast their views on the social media by flashing their RFID enabled bands at the installation.

Tata DOCOMO presents ‘MTV Power of One – Youth Marketing Forum 2012’ had an eclectic mix of speakers imparting knowledge and insight into the dynamic youth of today, revealing how the youth prefer to be ring players and not ring viewers.