The TVC by O&M brings out the fun, craziness and thrill that have turned IPL into the mega mass brand that it is 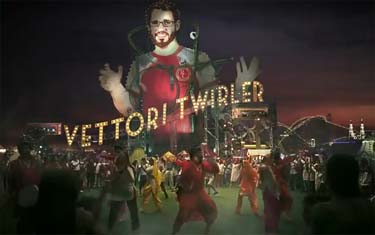 The TVC by O&M brings out the fun, craziness and thrill that have turned IPL into the mega mass brand that it is

The mass mania over IPL never ceases to amaze. Continuing with the mantra of craziness and cricket rolled into a mega brand called the ‘Indian Premier League’, Ogilvy & Mather has developed a fast-paced campaign for the 5th season IPL based on the consumer insight that IPL is the future of cricket and entertainment.

The campaign proposition, “Yeh IPL Hai Boss” (This is IPL, Boss), voiced by actor Makrand Deshpande, only adds to the excitement that the T20 tournament promises from April 4-May 27.

Abhijit Avasthi, National Creative Director, O&M, said, “The TVC brings alive the spirit of IPL – entertainment and cricket. The track that has been used resonates with everybody, across ages. Carnival has been used as a metaphor, since it has the quality of attracting everybody.”

The joyrides in the TVC, named Slinga Malinga, Gilly Funda, Dravid Wall, Dhoni Dhammal, Pathan Ponder, Vettori Twirler, Viru Whammer and Master Blaster, show the face of the cricketer after whom it is named, and also personalise each cricketer’s USP.

The ad has been picturised on the song ‘Eena Meena Deeka’. With special effects done in Sweden, the TVC was shot in Mumbai.

“IPL is where the world's best talent comes together and each player leaves you with a unique experience – every evening. It is a carnival of passion, talent and skill, engaging all your senses, playing the role of a fun-filled family outing or an exciting evening plan for friends with ease. Doing this film was immensely satisfying because of the detail and scale it demanded, factors that the IPL brand demands,” said Anuraag Khandelwal, Senior Creative Director, O&M.

Anup Chitnis, Executive Creative Director, O&M, said, “Cricket as a passion is a given in the country. But IPL is a format that is refreshing in its approach and presentation of cricket. Our communication also had to do the same. We had to be fresh and unique in portraying the excitement and thrill surrounding IPL.”

The one-minute master TVC will give way to shorter versions. Apart from the TVC, the campaign is currently underway in print, radio and digital mediums. “The IPL will unfold over various mediums and various elements soon,” Avasthi informed.

When asked about his views on the campaign, Satbir Singh, Managing Partner & Chief Creative Officer at Euro RSCG India, said, "I think the IPL Carnival TVC does capture the T20 version very well. While the cricketing excitement will always be there, IPL brings in families to the stadia. This form is not for the puritan. It is more than just cricket."