Minus Akshay Kumar, Thums Up launches its new campaign

Conceptualized by Leo Burnett, the campaign features Superstar and Thums Up Brand Ambassador in the South, Mahesh Babu 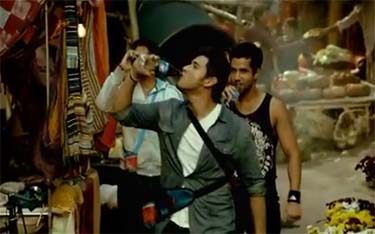 Minus Akshay Kumar, Thums Up launches its new campaign

Conceptualized by Leo Burnett, the campaign features Superstar and Thums Up Brand Ambassador in the South, Mahesh Babu

The exciting campaign shot in Bangkok, attempts to highlight a gripping tale with a series of daredevil acts by Mahesh Babu and his team, who use Thums Up as a fuel to achieve their mission to do something ‘Toofani’. Mahesh, as the leader of the pack, inspires his team to use a combination of bold action, smart thinking and team effort to outwit all the challenges, demonstrating the Bold Leadership and daredevil attitude of a Thums Up lover. This campaign marks the evolution of the Thums Up man from being the ‘Angry Young Man’ to the ‘Cool Risk Taker’ then the follower of ‘Playful Mastery’ and now the advocate of Bold Masculine Leadership.

Today’s generation of Indian youth crave the admiration and following of their peers. They desire to lead the pack and show them the way. The new Thums Up campaign, ‘Aaj kuch toofani kartey hain’ builds on this insight and showcases the evolution of the Thums Up Man as the crusader of Bold Masculine leadership. Now the Thums Up man is no longer ‘Chasing the Thunder’ but ‘Living the Thunder’

Speaking about his experience, Superstar and Thums Up Brand Ambassador in the South, Mahesh Babu said, “Thums Up is India’s most resilient iconic soft drink brand, and has a strong resonance with action, energy and a go-getter spirit. My association withThums Up over the years has made me do some real exciting action and has given me opportunities to push myself and indulge in extreme action. The new campaign is very exciting and it has been a great experience shooting for this campaign. I hope our viewers will see that translate on the screen”.

Conceptualized by Leo Burnett, the TVC has been directed by famous Hollywood action director, Nick Livesey, who was part of Hollywood blockbusters like Black Hawk Down, Gladiator and Hannibal. The thumping and inspiring Anthem for the campaign has been composed by the lyricist duo of Ram Sampath and Amitabh Bhattacharya of Delhi Belly fame. The campaign will be amplified through a 360 degree integrated communication plan.

Commenting on the film, Sainath Saraban, Executive Creative Director, Leo Burnett, said, “Thums Up campaigns are about ultimate adventure and daring stunts that reflect the brand’s persona. The new ‘Aaj Kuch Toofani Kartey Hain’ campaign with Mahesh Babu, Sahil Shroff, Dhaval Thakur and Angela Jonsson has been designed to give the consumers a differentiated and thrilling experience. Shooting this campaign was extremely challenging and exciting and what added to the stature of the stunts was the direction by renowned Hollywood action director, Nick Livesey”.