Discover the true killer on the massive ship, and what happened after the ship sank on April 14-15 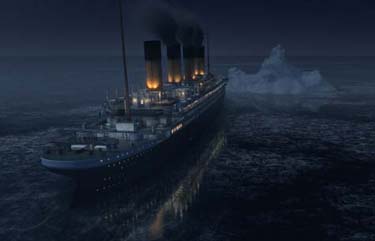 Discover the true killer on the massive ship, and what happened after the ship sank on April 14-15

On April 15, 1912, the RMS Titanic hit an iceberg and sank, claiming the lives of two-thirds of those on board.  Everyone knows the story of the Titanic: the 1,500 passengers and crew who lost their lives when she hit the iceberg, the fatal shortage of lifeboats, and the heroic band that played on as the ship went down. But, how did water make its path of destruction through the ship and how in just under two hours, laid her and its victims to rest on the ocean floor?  What happened afterwards?

To commemorate the 100th anniversary of Titanic’s ill-fated maiden voyage, Discovery Channel brings two special programmes, Inside the Titanic and Titanic: The Aftermath, recreating the events using first-hand stories of the survivors. Exploring how the sea water made its way, what happened after 1,500 people were left unaccounted for, including the voyage of the ship sent to recover lost passengers, the entirely new forensic system that had to be established to identify the dead, the rarely seen photos taken to aid that identification process, and the impact that echoes through the generations of the victims, the programmes bring new insight into the story.

The two-part special will premiere on Discovery Channel on Saturday, April 14, and Sunday, April 15 at 8 PM.

Commenting on the programmes, Rahul Johri, Senior Vice-President and General Manager – South Asia, Discovery Networks Asia-Pacific, said, “Discovery Channel continues to build on its commitment to bring exclusive, topical and engaging content for its viewers.  A century after the Titanic disaster, Discovery Channel will reveal unparalleled details of what really happened on the ship before and after its tragic hit with the iceberg.  Featuring interviews with the descendants, archive footage, unseen photographs and dramatisations, the programmes will uncover unknown aspects of the Titanic story.”

The sinking of the Titanic was the biggest maritime disaster in history and continues to fascinate researchers even after 100 years. Now, for the first time, Discovery Channel’s programmes showcase what happened from the point of view of the killer itself: the Water.

Inside the Titanic is a powerful and compelling film recounting an unknown aspect of the Titanic story – exactly how does a ship, that's thought to be unsinkable, drown on her maiden voyage?  Inspired by those who were onboard, it dramatises the testimonies of people who witnessed the disaster firsthand. The programme follows the water as it bursts through walls, seeps silently under doors and engulfs freezing passengers. Stories are told through action-led reconstruction of eyewitness reports, drama interviews based on transcripts, and the highest quality effects, including the sounds those on board would have heard as the sea surged through the ship. By following the water, this compelling film reveals exactly how the Titanic sank.

For the families of its victims the impact of the catastrophe resonated down the generations. Titanic: The Aftermath provides a gripping account of how families of the victims found out the truth about what had happened to their loved ones, and how their lives would never be the same again after the sinking. Beginning where other accounts usually end, the second episode tells the story of the remarkable mission to recover and identify the bodies of victims.

The docudrama reveals how a Canadian team, charged with recovering Titanic's lost passengers, had to invent a whole new forensics system to identify the dead. Led by Halifax public servant John Henry Barnstead, the team inspired a breakthrough in forensic methodology, a procedure still used in mass disasters today. The experiences of Barnstead, the recovery team and other characters are recreated in exceptional detail in this compelling programme.

Meeting the descendants of three people on-board, Titanic: The Aftermath reveals the impact of sinking on the fate of their forbears and what happened next. Jock Hume died playing the violin he loved. His grandson, Christopher Ward, travels to Scotland and to Nova Scotia to find out more. John Jacob Astor was the richest man on the ship who perished after ensuring his pregnant young wife was safely aboard a lifeboat. His young wife Madeleine survived and their granddaughter, Jackie Astor Drexel, follows their story.

In 1912, John Barnstead was Halifax’s registrar for deaths whose efficient methodology became the model for modern forensics. Now, his descendent, also named John Barnstead, finds out how John Barnstead Senior created a model for future disasters involving mass loss of life. Featuring emotive drama and unseen photographs of the Titanic dead, this is a powerful and moving record of an unknown aspect of the Titanic story.

The three central characters came from different sides of the class divide, but died together as the ship sank. Two of them would leave posthumously born children who would thereafter wear the scars of the disaster. The third would be the man responsible for identifying the victims after death, and whose pioneering forensic work, undertaken under the relentless prying gaze of the world’s media, would define how victims of disasters were treated for years to come.