Conceptualizes a micrositewww.appyfizz.com as part of the campaign, adding more fun and excitement to hanging out 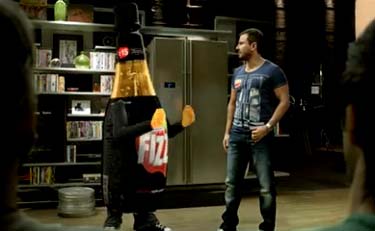 Conceptualizes a micrositewww.appyfizz.com as part of the campaign, adding more fun and excitement to hanging out

Continuing to be witty, AppyFizz now gets a new and interesting inclusion in his friend circle with thecool and famous Saif Ali Khan. Popular amongst his gang of friends for hissparkling wit, one liners and tireless fizz, Appy Fizz, will now be seen hanging out with Saif Ali Khan, in a series of TVCs created by Creativeland Asia.

In the films, we see Appy Fizz hanging out with Saif and friendsduring his shoots for films. In the first filmfrom a campaign of three films, we see Saifgreet his friends as he entershis personal pad at the film studio right after pack up.Appy Fizz jumps out of the fridge eager to see his friend after his long hours at work, startling Saif. Saifthen introducesAppy Fizz to his bunch of friends. And then there is no stopping Appy Fizz. In his typical witty style, Appy Fizz claims to his new friends, how Saif and he havedone many films together, as a confused Saiffinds this unbelievable.Appy Fizz then explains how he was always present in the intervals at the popcorn-and-drinks counter. This funny banter continues and we see Appy Fizz win the hearts of his new friends with his light hearted humour.

Says Nadia Chauhan, Joint Managing Director & CMO, Parle Agro, “Saif Ali Khan is a great youth icon who loves his work as much as his life. The actor brings in the cool quotient to Appy Fizz’s friends circle, and both together complement each other and make a very entertaining duo. We’re sure the two will make a winning pair.” Speaking on the brand, she further added, “Right from inception, Appy Fizz has been a runaway success. It is the creation of not just a successful brand but a successful category and we are the only players offering such a unique product in the market today. We see huge potential in this brand and its massive acceptance has us led us to investing heavily in it. We see a very large growth contribution from Appy Fizz this year and in the years to come.”

Commenting on the campaign, Sajan Raj Kurup, Founder and Creative Chairman, and who also happens to be the director of the films, said,“I’m glad we have been able to design a campaign that preserves the sanctity ofAppyFizz communication over the years and yet build in a popularity factor through Saif Ali Khan as a celebritycast.What makes it even cooler is the fact that it has been able to depict Saif Ali Khan as a hangout buddy and not necessarily a celebrity endorser in the campaign.”

On this new association ActorSaif Ali Khan says, “It gives me great pleasure to be associated with Appy Fizz and look forward to a long fruitful relationship with the brand. I believe brand endorsements are partnerships which go beyond what one sees on TV and Print. Appy Fizz came to me with really exciting concepts which got me interested. Many new ideas and innovations will be seen by the consumer shortly and I am confident that they will be loved.”

As part of the campaign, Creativeland Asia has also designed and developed a microsite, www.appyfizz.com making hanging out even more fun and interesting and a lot simpler for friends.

So, if someone wants to hang outwith their friends all they have to do is visit the website, and choose one of the optionsfor hanging out with friends either at a nightclub, a bar, a café, an entertainment or for a house party. Once they choose an option, Appy Fizz asks them a locality they are interested to hang out in and accordingly suggests to them suitable places they can go toin that specific area. If the visitor opts for a house party, Appy Fizz suggests places in the vicinity where they can buy drinks, food or any other supplies from.Friends can even create an event complete with details like time and place and automatically post it on Facebook and Twitter and invite friends for the same. Creativeland Asia has also developed a Mobile application for those on the move.

The website is designed like Saif Ali Khan’s personal pad at the film studio, complete with a music system that allows you to play your choice of sound track as you explore the website, and a Television that connects you to the Appy Fizz page on Youtube. We see Saif sitting on a couch and Appy Fizz giving him company.

The campaign has been conceptualised by Creativeland Asia and the films have been directed by SajanRaJKuruphimself and have been co-produced by Equinox and Crocodile films. The Vfx and the animation is created by Mfx in Kuala Lumpur.