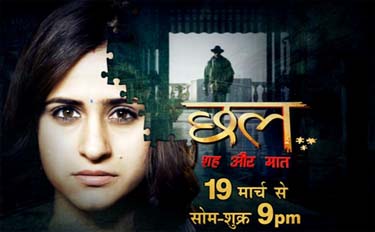 Ever wondered what follows happily ever after? Was what you thought to be the end, really the end? What if there is something that could happen later and can change your life completely? COLORS’ first foray into the social thriller genre, ‘Chhal – Sheh Aur Maat’ will highlight just that. Produced by 24 Frames, Chhal is a pure play of deception, betrayal and mystery. Encased in an element of surprise and shock, it is a story that is bound to force the viewers to think – a classic example of what you see, is what you don’t get! Get ready to find out who has the reigns to this game in Chhal – Sheh Aur Maat’ starting March 19th, 2012, Monday to Friday at 9.00 PM.

Speaking about the unusual genre being explored for the first-time-ever, Prashaant Bhatt, Fiction Head of COLORS said, “This is the first time we're exploring the social thriller genre and we are very happy to have the geniuses of the genre –Abbas Mustan supporting our debut/first step. Chhal in our way is a tribute to their kind of film making which forces audiences to think and keeps them on the edge of their seats. The storyline of the show is extremely intriguing, drops unexpected juxtapositions for the viewers to establish connections with the characters. It may sound like a simple story of a newly-wed bride, but on the contrary, it will take you through twists and turns that have been carefully woven to create the web of mystery and thrill. With the suspense and action element built into the script, Chhal is going to be a visual treat for the audiences. Adding this new thriller to our programming lineup, we will now be able to provide our audiences with wholesome entertainment in every genre including social dramas, romantic comedies, sports entertainment, scripted reality and more."

Bollywood director duo and the ‘geniuses of the thriller genre’ Abbas Mustan attend the opening ceremony of Chhal – Sheh Aur Maat marking the launch of the show.

Commenting on the thriller genre, the director duo Abbas Mustan said, “Thrillers have the ability to stimulate a viewer’s mood - create anticipation, build expectations, surprise, anxiety all in short time. The genre attracts a huge audience for its style of story-telling and showcase of edgy content. Having worked on numerous thrillers concepts, we believe this kind of content is engaging and entertaining. It’s great to see Television moving to this direction and introducing a show like Chhal.  The show has all the elements of watching a film – emotions, excitement, suspense and exhilaration that drives the story. It’s a must watch!”

Set in the snowy mountains of Garwal, Chhal is the story of Neha – a newlywed bride. She is entwined in a situation where her life changes dramatically while on honeymoon as a strange man, Kabir, stakes claim on her as his wife… leaving behind a mystery on her marriage and life ahead. Shot in a stylized manner, the story takes the viewers through the trials in Neha’s life as she tries to demystify the truth. The fast-paced narrative and nail-biting moments will only add to the thrills of the show making for an interesting watch.

Speaking further about the show Bhairavi Raichura and Nandita Mehra of 24 Frames said, "Chhal – Sheh Aur Maat is a story that will force you to think and make you question whether what you see is really the truth. While discussing the script, we constantly tried to think like the audience to ensure that the story was not getting predictable at any point. We went ahead with an idea for any scene only if we were able to surprise ourselves. Chhal’s story involves a lot of action, where audiences can expect to see an interesting combination of suspense, thrills and daredevil stunts. Moreover, the edge-of-seat action will constantly keep you guessing about what will happen next.”

Chhal – Sheh Aur Maat, the first-ever social thriller from the COLORS stable, not only has an intriguing concept and storyline, but also an exciting star cast. Hunar Halli essays the lead role of Neha, a newlywed bride. Her costars on the show, Rishi played by Abhishek Malik and Kabir played by Avinesh Rekhi have been selected after a lot of research was conducted about the personalities of the characters and the traits that would make their characters more relatable. Other than the trio, viewers will also witness popular faces like Rajesh Balwani, Raymon Singh, Aishwarya Narkar, Karan Goddwani and Dev Keswani, upping the thrill quotient on the show, keeping the audiences on the edge of their seats!