An inspiring story of a small town girl and her adventures in the Big City premiers on March 19 on dual timeband at 6.30pm and 8pm 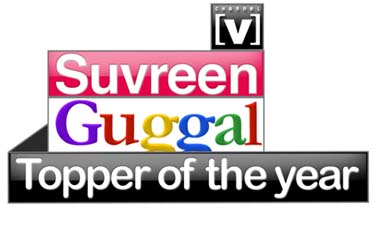 An inspiring story of a small town girl and her adventures in the Big City premiers on March 19 on dual timeband at 6.30pm and 8pm

Channel [v], the leading youth entertainment channel, announces the launch of Suvreen Guggal – Topper of the year, a fascinating story of a small town girl and her adventures in the big city. It is an inspiring tale that states that there’s more to this generation than IPod and Low-waist jeans. Set against the backdrop of manifold aspirations, peer pressure, parental problems, college politics and teen anxiety, the story chronicles the lives of youngsters studying at DPSC, a prestigious college in Delhi, led by one crusader, who activates a stream of change in the campus.

Suvreen Guggal, the quintessential girl from Kathgodam is simple, moralistic, cheerful and determined. Hailing from a middle class family with high expectations, she is instilled with passion to enter the Big fancy city life. Her dreams come crashing down when reality hits hard but Suvreen’s fortitude to fulfill her dreams makes her compelling and charismatic among a group of students whose dreams were shattered by a few marks. She fights against all odds becoming a ray of hope for thousands of youngsters at the campus. Interweaved in love and college politics, this riveting and humorous drama is all set to entertain its audience beginning March 19th 2012.

Announcing the launch of the show, Prem Kamath, Executive VP & GM, said “Majority of the Indian youth are dreamers, living the dream of others, be it parents, friends or simply popular culture. Suvreen Guggal, deals with the hopes and dreams of a small town girl and her endeavour to break free from peer and parental pressure. The series is a light hearted entertaining drama that captures her rollercoaster ride from a small town to the high college life of Delhi.”

The lead character of Suvreen will be portrayed by Smriti Kalra of 12/24 Karolbagh (Zee TV) fame. Speaking of the show, Smriti said, “Channel [v], which was primarily a music channel, is now offering a series of shows, both fiction and non-fiction, to provide complete entertainment to its audience. On March 19th, you will see Suvreen Guggal, hopping and smiling, wondering and asking questions that cross your mind, the answers for which cannot obviously be looked for. This is where Suvreen Guggal comes in, finding solutions in her own quirky and funny ways. The character of Suvreen is very interesting and captivating and will definitely have a huge connect with the youngsters”

Veteran actor Akshay Anand will be rendering the role of Suvreen’s father. The show has been produced by Four Lions production.

Channel [v] has deployed an aggressive 360 degree marketing campaign to launch the show. Along with creative show promos, extensive and innovative outdoor hoardings and digital promotion, the show will also be marketed through the mobile platform.