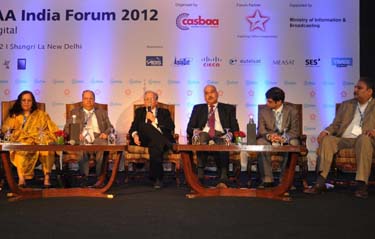 Moving towards ‘digital deadline’ with apprehension

With the first digital milestone – June 30, 2012 – within sight, the one-day CASBAA India Forum held in New Delhi yesterday provided a platform to local and international multi-channel TV industry leaders and experts to discuss the implications of the impending digitisation deadline along with topics ranging from bandwidth supply, India’s regulatory environment, content creation and advertising opportunities.

Even as India’s DTH subscriptions are forecast to double between 2012 and 2016 to 47 million with revenues quadrupling to $3.4 billion, DTH operators are still facing several issues such as low ARPU, high cost of acquisition of content and subscribers, and grappling with various government taxes.

The first panel debated the progress made by industry and government so far. Ashok Mansukhani, President, MSO Alliance, listing his concerns, said, “The licensing norms, tariff structure and level-playing field are some of the concerns that the government needs to address. We have spent a lot of money to digitise Indian television sets voluntarily. It is important that the government recognises us as an infrastructure industry, gives us customs duty reduction and tax holiday.”

Narayan Rao, President, National Broadcasters Association, and Executive Vice-Chairman, NDTV Group, was of the view that digitisation would offer huge potential to broadcasters. But he expressed concern over the high carriage fee payout in India.

The forum also saw DTH operators talking about how they are still bleeding even though the subscriber base is growing in India. RC Venkateish, CEO, Dish TV, remarked, “DTH is an infrastructure business and capital intensive in nature. Digitisation will help in the profitability of a company only in the longer run.” Harit Nagpal, MD & CEO, Tata Sky, pointed out, “Of every Rs 100, the DTH operator has to shell out 32-35 per cent as taxes and the broadcaster takes about 35 per cent. So, what am I left with? The DTH operators in India have shelled out Rs 20,000 crore so far towards digitisation.”

Sanjay Behl, CEO, Reliance DTH & IPTV & Group Head – Brand & Marketing, Reliance Communications, said, “Given the unstructured market, I do see consolidation happening in this space, which will be more for financial reasons than strategic reasons.”

Supriya Sahu, Joint Secretary (Broadcast & Policy), MIB, said, “We are also considering digitisation of broadcast TV and there is adequate policy support in this case. The deadline is 2017.”